Now I have cut the first panels of the jacket I can get onto some real exciting stuff – making it up into the Ultimate Tennant Suit!

First I had to correct a minor problem with the back of the suit, which involved re-cutting a new panel for the area above the belt. I was trying to get round it, but had to bite the bullet.
Here is where I cut it from: 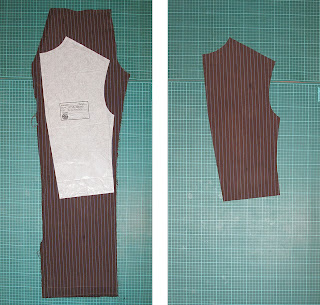 I used the fronts from the pair that had provided the front panels of the suit.
The reason I recut was to correct the grain direction of the fabric, which should run slightly diagonally from the waist to the shoulder, not the centre back.
You live and learn. 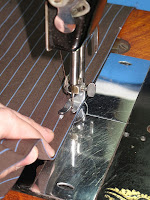 Anyway, that out of the way I can at last start sewing some real GAP fabric!
I start with the front panels, and stitch the chest darts, which run vertically from the upper chest down to just above the pockets (see right - the first line of stitching!).

Once this is pressed out, and the fronts are interfaced as per the Hand Tailoring I outlined recently, I can think about making and setting the breast pocket.

It is sewn on the surface of the jacket with a separate flap above. The pocket has a box pleat on the front.
This has to be constructed very carefully, as it must span precisely three pinstripes.
The trick is to stitch up the centre behind the pleat at just the right place so a pinstripe lines both front edges of the folds (see left, top).

I then press the edges under, again lining along the pinstripes, with a one inch roll-fold at the top.
This is then pinned in place, aligning it with the pinstripes on the body of the jacket (see left, middle).
There is a level of compromise here as the chest dart expires under the pocket. This means it is possible to square the pocket to the pinstripes on one side only (take a sneak at the finished pocket and look at the right-hand edge to see what I mean).

Finally the pocket is top-stitched in place, with a sort of stretched triangle of strengthening at the top corners (see left, bottom). 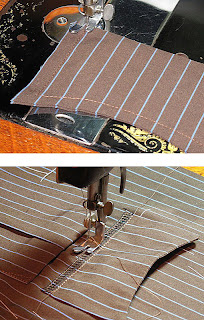 I then need to do the breast pocket flap. This is quite simple really.

First I sew the flap together from two pieces of fabric, leaving it open at the top (see right, top).
This is then clipped at the corner points and the seams graded before turning and pressing it flat.

To stop the attaching edge bulking, I overlock the open end (rather than double-fold it) and then stitch it in place above the pocket (see right, bottom).

Once flapped into position I then firmly press the edge and it happily sits in the right place. 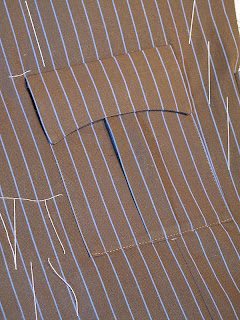 Here is the finished, pressed and crisp result (see left).


The white stitching around the pocket is tack stitches I have put to keep the body of the jacket and the horsehair interfacing together while I work – these will obviously be removed before I finish!

Next up is sewing the two outer pockets.

After I have joined the fronts with the side panels (the pockets need to span the join) I then prepare the pocket welts/flaps.

I do love the design of these pockets. To start with their construction had me foxed, as they have a curious faux flap behind which you gain access to the pocket itself – very unusual. But once I work it out I found that it is almost more fiendishly simpler to sew than a conventional suit pocket.

I then chalk-line the level of the pocket opening (which is around one inch below the top level of the flap) and sew the flap in place (see right, top).
It’s slightly complicated to explain, but it is sewn as if the flap has flopped down the side of the jacket!

I then sew a pocket facing above this. I have stiffened this with interfacing to give the pocket some structure, and you can see this face up as I sew it in place (see right, middle).

Once the pocket opening is slit and the welts/flap are turned, I can then attach a pocket bag inside (see right, bottom).

The flaps are then sewn up into their final position with a rectangle of top-stitching on either side. This also catches the raw edge of the pocket opening, neatening and strengthening in one go.

Here is one of the finished outer pockets (see below). 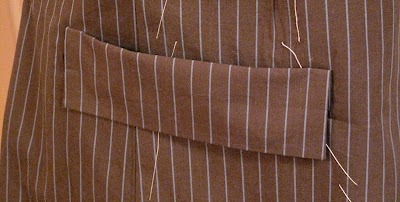 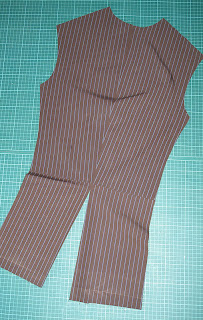 Next is assembling the back.

First I unite the newly cut upper back panels with the tails I retained from the old version. Notice how the grain runs vertical on the tails, but diverges up the back (see left).

I then need to make the back belt strap.

This is cut so when pressed with a seam allowance, precisely four pinstripes are visible (see below, left); I then pin this in place across the back, centred over the horizontal seam (see below, centre); finally this is top-stitched in place, sewing just inside of the pinstripes so as to not obscure them (see below, right). 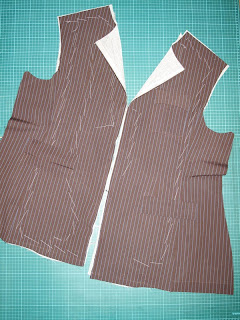 Once this is all done, it completes the work on the individual pieces that make up the body and they are all ready for uniting!

You can see the front panels here (see left) with the tack-stitching spiralled around the outer edges, keeping the interfacing in place underneath.

The back panel also has a section of interfacing covering the shoulder area (see below, right), helping to smooth the upper back when worn. 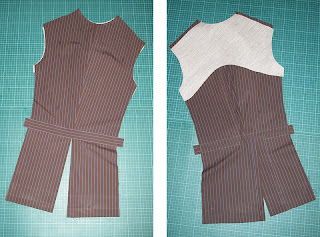 I cut this on the cross to give it some stretch across the shoulders, and as I explained in my Hand Stitching posting, it extends to just under the arms, giving further support to the seam between the body and the sleeves.

Here is the assembled body of the jacket, put up on my mannequin for the first time.

It’s looking pretty good and I am very happy with how things have gone.

The practice I have gained from making numerous tests has paid off. 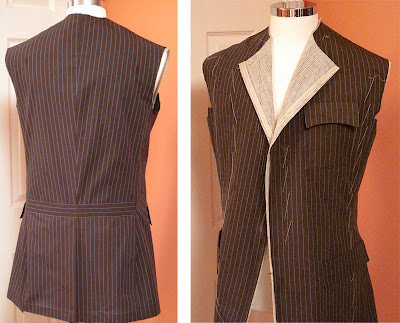 You can see the pad-stitching I have done on the under-side of the lapels, which help keep them folding at just the right point. 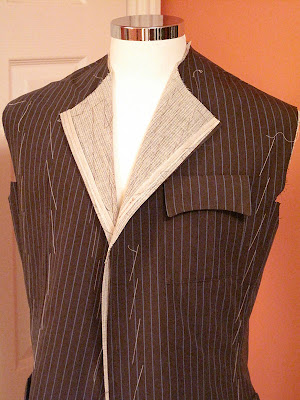 Next up I need to cut and set the sleeves before moving on to the lining.

Check back real soon to see how things go.
Posted by Steven Ricks Tailoring at 14:43