Me And My Tennant Suit - Dan Neumann

It’s been a few months, but I thought I’d post anther entry in my occasional series, Me And My Tennant Suit.
This time we have Dan Neumann, who I had spotted at Gallifrey One this year and kept meaning to say hello to, but he was either busy chatting or I was in a rush to get somewhere.
Anyway, I friended him on Facebook and asked him to contribute. He’s what he had to say. 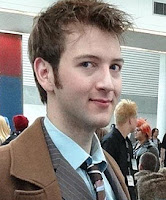 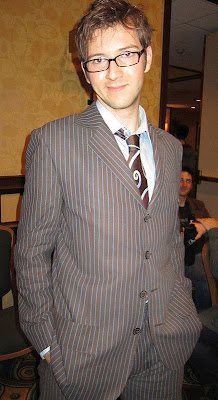 I opened by asking Dan when he got his suit, “I ordered my suit in April 2011, right before FanimeCon!”

“After discovering Doctor Who a few years ago I was instantly obsessed with it, especially since David Tennant was my first Doctor”, he told me about his first encounter with the series. “A month or two after finishing the series I realized that I looked a fair amount like the tenth Doctor, and I had always been interested in cosplay but was too much of a perfectionist to go after something harder.” With that advantage in mind it seemed like a logical progression.
“I realized that replicating the tenth Doctor’s look was something that I would be able to do fairly easily, with the right suit - and so I found one!” 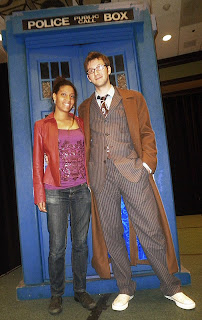 But what was he looking for in a suit? “I was looking for the best possible screen accurate suit I could get without breaking the bank. As a poor college student, I wasn’t prepared to spend a whole lot of money on a suit, and so I ended up looking for something around the $300 mark that was the most screen-accurate. The Baron Boutique suit worked excellently in this regard!”

So how was the fit? “Though it took a couple of round of alterations on the coat and the pants, it currently fits great! One of the best fitting pieces of clothing I own.”

READ MORE
Posted by Steven Ricks Tailoring at 19:00 No comments:

Last week I showed you some photos of Kevin Coppa, wearing his Ultimate Tennant Suit, at my local golf course surrounded by dinosaurs!

Well now I have some pictures of him at Southerndown Beach, aka Bad Wolf Bay.

First was used in Army Of Ghosts and Doomsday, it was where Rose said an emotional farewell to The Doctor (see right).

Later they return to the bay for a similarly emotionally charged scene in the close of Journey’s End (see left).
More recently it was the crash site of the Byzantium in the Matt Smith episodes Time Of Angels and Flesh And Stone; and it is due to appear again in series seven.

The photos below form part of a massive shoot we did in Cardiff, more of which will follow soon on my blogs, so watch out for them. 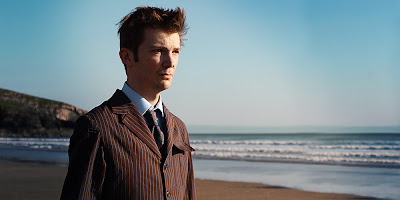 Southerndown Beach is very popular with swimmers and families, so we had to choose our moments to get the views to ourselves. Sometimes the locals got in the way, but they were a friendly bunch! (see left)

While we were there, we did some portrait shots, as well as some more action stuff! (see below)

But the main shots we wanted to do were the ghostly appearances of the Tenth Doctor from the close of Doomsday.
We did a couple of set-ups, and I’m pretty happy with the results. Let me know what you think! 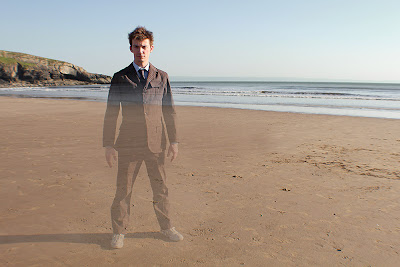 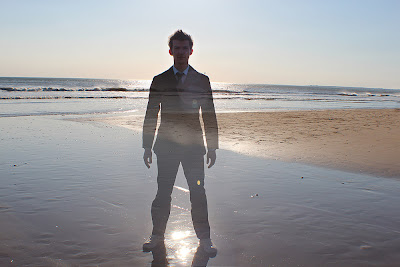 A little while ago costume designer Louise Page told us the background story to the recurring space suit worn by David Tennant during a number of his adventures.

It first appeared in The Impossible Planet and The Satan Pit as part of the equipment at Sanctuary Base Six; the idea of a space suit returned (abet remade) in 42; before making a final appearance in The Waters Of Mars.

The suit may look to be custom designed, but Doctor Who is made on a limited budget and if anything can be sourced as pre-existing pieces, it will be – and this suit is a prime example.

All of the accessories such as gloves, boots, harness and base of the helmet were all widely available at the time of production for a reasonable price. 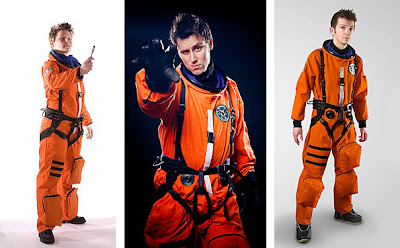