Just to prove that it does happen, there has recently been a couple of ties on eBay which are identical to the ones worn by the Tenth Doctor! 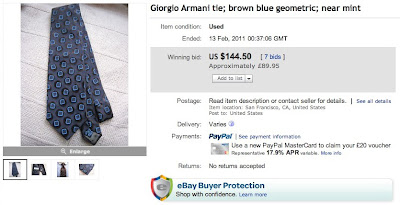 The description was as follows:


You are bidding on a beautiful Giorgio Armani (white label) necktie. Although pre-owned I am very confident in saying that it is in near mint condition without even the most minimal of fraying at the tips. It has been worn 2-3 times maximum and treated with the utmost care in a smoke-free home.

The base color is rich chocolate brown with blue undertones; pattern is brown circles with blue squares inside. 100% silk of course.

As I need to make room for new purchases, my wardrobe clearance is your chance to win this and other items at a fraction of their original cost. New Giorgio Armani ties now retail $145 on average, however I will start the bidding on this item at a low $4.99.