Now I have finished the calico test for the suit I am making, I thought I’d take a brief break and show you some of the new techniques I have used in making it.

I have been slowly drifting away from “home-sewing” and steering towards more professional, traditional techniques. The test I have made (see right) contains absolutely no fusible interfacing. Instead it uses a variety of non-fusible stiffening materials, much more appropriate for a suit of this nature.

To learn the use of these I made a half-scale sampler of a tailored jacket during the autumn term at college, using a very helpful text book for guidance (see left). Doing the jacket in half-scale speeds up the process and makes it a handy reference piece. Only one side is made – since it is a mirror of the other – and by not closing it off completely, it will allow for inspection so it can be an on-going reminder of how it was made.
A sampler like this can become as involved as you like, with outer and breast pockets, linings and inside pockets – but I’m concentrating on the collar and lapel construction so will limit myself to this – I won’t even be setting a sleeve. 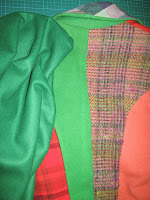 While working on numerous projects, you inevitably accumulate left over fabrics or buy materials with good intentions that never get used. This happened with some moleskin I bought years back (pre-dating my blogs), planning to make my then MkII Tennant Coat with it. Before work could start, I found the Malabar, which I still use today. The moleskin went to stock, but I did then try to use it to make an Inverness Cape, but that proved to be a very unsatisfactory exercise.

More recently, while sourcing potential fabrics for my Six Coat, I bought some green baize from a John Lewis remnants box (see right). Sadly it wasn’t a match, but luckily it was only a metre at most, and I only paid half-price for it, so I put it done to experience.
Again this went into stock, and today it bounces back out, this time to make my jacket sampler.


Here are my notes from making the sampler late last year

My tutor has given me a basic jacket pattern to use, which I cut it from my fabric.
Next thing I need to do is cut my own pattern for the interfacings, based on this supplied pattern and covering the areas that need support.
This covers the shoulder area of the back, sweeping down under the armhole to give support to where the sleeve joins; and on the front, covers the upper chest, the front edge of the jacket, and again under the armhole. 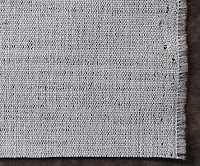 The intention here is to use zero fusible interfacings which are principally hand-stitched in place, and made from traditional non-fusible, woven cotton and horsehair (see left).
It is fairly stiff (to give the support I need), but flexible with a springy quality (which bounces back during wear) ideal for this use. Being woven it has a grain, which I need to cut to match the grain of the body.

In both sets of pictures are: left, jacket pattern with interface pattern laid on top; centre, the cut body of the jacket with woven cotton/hair interfacing in place; right, turned right-side, the interfacing is tacked in place.

The interfacing is lightly tacked in place to the front, and stay-stitched around the edges on the back.

I then need to start building the structure that will support the jacket, and give the lapel the desired roll.

This is achieved by pad-stitching a line of linen tape just below the roll line (see left).


Pad-stitches are small horizontal tacking stitches that are sewn through to the front of the jacket, barely breaking the surface. They are spaced around 15-20mm apart in columns, creating a herringbone effect of threads across the pad-stitched area. These firmly bond the two layers together, but being hand-stitched, give you greater control over the lay of the fabric that fusible interfacings tend to bludgeon.

I am doing all the pad-stitching in white cotton so it shows up clearly, but in reality it would be done in a matching thread, making it near invisible. It is time consuming work, but once you get going isn’t too bad – again another reason why the sampler is half-scale! The finished result, if done right, is much better and is more stable during the life of the garment.

The edge of the tape is then also sewn to the interfacing so it does not catch and lift.

With the lapel folded into its finished position, I then pad-stitch the lapel area, running parallel to the roll-line.
This is done in a matching thread to the body of the jacket, so if any stitches break the surface, they do not show (see left).
If you look closely you can see the green stitches in the herringbone pattern on the reverse of the lapel.

I then edge the vertical edge of the front with more linen tape, attaching it to the interfacing with a running stitch on the outside edge and a cross-stitch on the inside. The tape ends where it meets the roll line tape (see left).

I now need to turn my attention to the collar, which is the most interesting part of sewing the jacket.

I am using a special collar or French canvas.
It is very stiff and when folded to shape keeps its position – almost like lightweight card. It is woven, with the threads in both directions of equal thickness, so when used on the bias there is no difference in how it pulls and stretches.
So, I cut the under collar and the canvas on the bias.


Whip Stitches are small repetitive stitches passing diagonally over the edge of the fabric in a spiral.

I then pad-stitch to the neck line one way, and to the collar edge the other. The collar canvas is cut to the net size of the collar, and the under-collar to a little large than this, except on the long edge of the collar, where it will be sewn to the upper-collar (see left).

In the meantime I have assembled the body of the jacket at the side seam and shoulder, ready to receive the collar.

The collar is hand-stitched to the neck line and the lapel facings to the lapels around as far as the notch point (see left).

The top collar is machined to the under collar and the seam pressed so it rolls to the underside, out of view.

Next the lapel facing (which is the visible face of the lapel before becoming the inside of the jacket below the roll line) is sewn to the body of the jacket up the front edge, around the lapel to the notch point (see left). 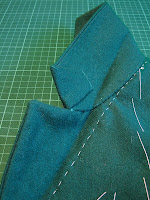 The front edge of the top collar is wrapped around the firm collar canvas, making a sharp, clean line with no visible seam along the leading edge of the collar (see left).
This, with the way the upper and lower collar were seamed together (see left, you can just see the seam is on the underside of the collar) makes the collar look lighter and less bulky. 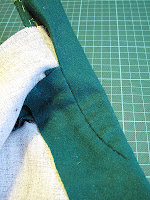 Then, with the seam allowance folded into position, the join between the collar and lapel facing is slip-stitched together (see left).


Slip-stitching attaches two parallel edges of fabric together hidden in the gap between them. Small stitches are sewn on alternate sides, butting the two edges together.

Hand-stitching this seam means it is not being pulled at stretched into position, so lays nicely in place. 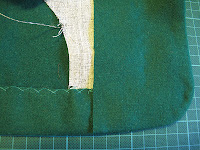 A last little bit of finishing up (for the purposes of this sampler) is to blind-stitch the lapel facing to the inside of the jacket, and herringbone-stitch the hem allowance along the bottom of the jacket (see left)


Blind-stitches are between two layers of fabrics, with the stitches only penetrating the surface of the material so they do not show through to the other side.

Herringbone-stitches are sewn in the reverse direction of the progression of stitching, creating a zig-zag.

As I said, I haven’t lined this test so it left open for inspection as a crib, but it would be attached to the neck line of the collar and the back edges of the lapels, before being herringbone stitched to hold the neck in place.

Here is a photo of the finished sampler. 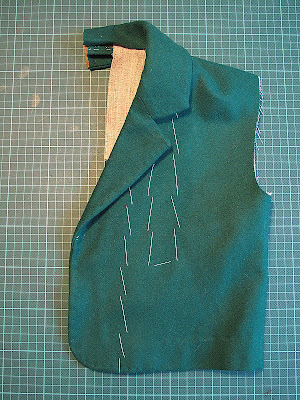 This was all done to a modern version of traditional techniques, with a lot of hand-stitching and materials associated with traditional methods.
The idea now is to take these skills, and if necessary blend them with up to date speed-tailoring to find a happy medium between speed and technique to give a good result in a practical timeframe.

I have already used a number of these tricks in some garments I have made, and will incorporated them into the Ultimate Tennant Suit I am making.
Posted by Steven Ricks Tailoring at 12:52