Me And My Tennant Suit - Lisa

Our latest Tennant Suit owner is probably the most unconventional to date. Lisa has been finding her’s on a budget - and managed to pick up some prestigious admirers along the way that I think we’d all be jealous of!
P 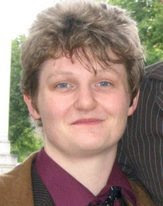 Name: Lisa
Age: 26, Eight days older than Matt Smith
Location: Dudley, West Midlands, England
Favorite Doctor: Ten, David Tennant. Though in fairness I’ve only seen One, Eight, Nine and Ten so far.
Maker of my suit: Honestdragonchina on ebay, and various purchases from charity shops
Colour of suit: Brown with cream pinstripe, brown with blue pinstripe, blue with shadow stripe, and navy with red pinstripe
Lisa got her first Tennant suit in August 2007 following a trip to see David Tennant switch on the Blackpool Illuminations. “The Doctor Who museum on the Promenade had hired people that dress up as the various Doctors to walk around the museum, the queues and the switch on arena before and during the event.” she told me, “One of those people was dressed like the Tenth Doctor, and I thought it was the coolest thing I’d ever seen! I was rendered speechless with excitement, and he’d walked past me several times before I found my voice to ask for a photograph.”
“I’d brought my coat a month or so prior from honestdragonchina. I’ve always had a thing for long coats, be it the X-Files or The Matrix, etc. But it was definitely meeting the paid cosplayer in Blackpool that made me want to dress up like a TV character.” 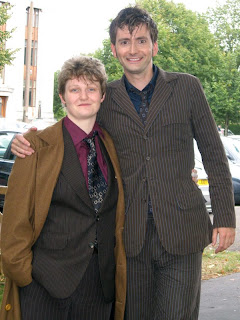 But her first point of call was not the internet: it was to the high street and local charity shops. “The first suit I compiled from various charity shops was on a self imposed deadline, and an illness-imposed budget. I’m unemployed because of Chronic Fatigue Syndrome. Three weeks after Blackpool, I was going to Cardiff with someone I’d just met at the Switch On. The brown trousers with blue pinstripe were the first find, then the unofficial converse in low red and high black, then the brown tie with blue and shadow hollow squares on it. I found a shirt that fit and the elusive brown pinstripe jacket the day before my holiday! It cost £15 for the whole outfit, but it was money well spent, as during my Cardiff holiday David Tennant came out of indoor filming specifically to see it.”

Since then Lisa bought a brown suit second hand through dw_cosplay that was originally from honestdragonchina. “It’s very snug. I’m a curvy female and it is very evident under the pinstripes! I’ve resorted to wearing a swimming top underneath to keep everything in check. I adore the pockets, though. I do wonder if they are bigger on the inside!” 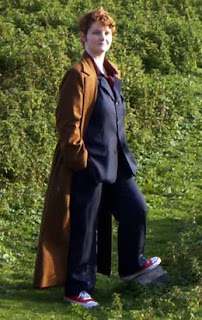 Lisa is also one of the few people I know who has a blue suit from honestdragonchina. “It is very baggy.” she told me, “ That, however, can be rectified.
“The first brown suit is in the loft for posterity. The navy suit with red pinstripe is in pieces waiting to be put back together.”“I would like to add that official converse are not designed for people with short, wide feet with narrow ankles. But I only paid £15 for my off-white ones instead of the standard £35.”

Lisa gets the opportunity to pull on the pinstripes about once every two months, though she wears the coat more often.
Her main chances are when she gets to go to Cardiff or Blackpool, Halloween, and getting into character for her fan fiction. “I’ve worn it to my only convention, and I wore it when my local library was celebrating its centenary by hiring a Dalek for a photo shoot. It’s been complimented by John Barrowman, Gareth David-Lloyd, Benjamin Cook and Russell T Davies during various signings and stage door events. I’ve ended up in DWM and twice in local papers because I dressed up.” 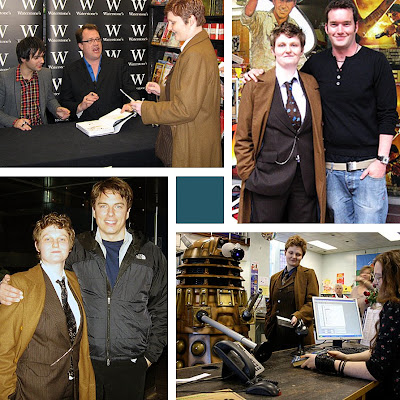 Asked what part of her suit is her favorite, she said, “Well, the bits David Tennant touched! And the quantity and depth of pockets. It gives me a confidence I was sadly lacking with my health. My family say I become a different person when I put it on.” 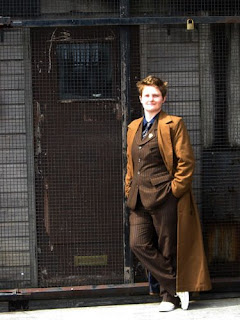 But what would she improve; was there anything that she is not happy with? “I’m not disappointed, per se. I’m constantly evolving the suits and making them mine, either through tailoring or painting the stripes blue or changing the buttons. I do it for me, not to be judged in competition for others.”
“The reaction of children, especially young girls as they tend to grow out of science fiction. If you look at the media, the toys are listed as ‘boys’ and the greetings cards are either in the male section or on the top rack of the generic section where children can’t see. I like to think I’m doing my bit to keep girls interested in science fiction and fantasy.”
“I’m also flattered when I’m in the Doctor Who Exhibitions that people think I’m part of the experience! I’ve also given several tourists in Road Dahl Plass whiplash with their double takes and craning to see if they are imagining things.” 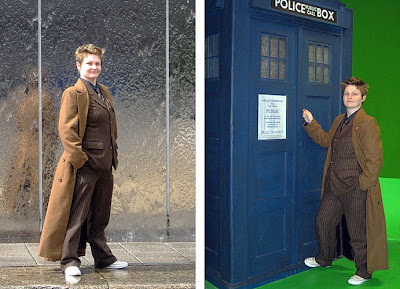 Lisa shows she is a true fan by putting a lot of others in the shade by owning four Tennant suits! Yes FOUR - count them: two brown and two blue!
“The first brown suit was from a charity shop. The second brown suit was second hand on dw_cosplay. I bought it because it had four buttons and it was in my price range. I saved up for my blue one from honestdrgonchina, and it’s very smart material but has no red pinstripe. I brought a second hand blue suit off ebay that is navy thin cotton with red pinstripe. It’s three sizes too big, so I’m in the process of altering it. I own about eight Ten(nant) ties, all bar one from charity shops.” 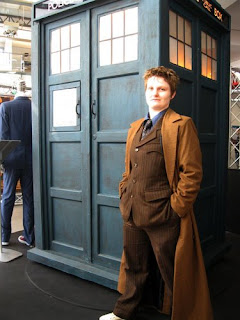 But will she change ranks and dress like Matt Smith from next year? “I doubt it. I think Ten(nant) is my Doctor. After all, people still dress up like Four, etc.”

The way that David’s costume has filtered into the psyche of the younger fans excites her, “I’m impressed by the volume of children that dress up in smart pinstripe suits because of Doctor Who. Normally, they would throw a fit if their parents tried to smarten them up for a formal occasion. Now, they dress in suits just because their hero does! Thankfully, the suits Velcro up the back, so they are easily removed from children avoiding bath time!”
“I personally don’t dress any differently to how I did pre-Ten(nant) suit.  I still lounge about in fleeces and wear clothes that don’t require ironing. I have, however, had the confidence to go into men’s tailor shops in search of evening wear. Before, I’ve been beaten down by peer pressure and general disapproval for being female. I find men’s tailored clothes to be of much better finish, practicality and durability than women’s clothes.”
“Also, my hairdresser doesn’t mind giving me a Ten(nant) cut. I just take Doctor Who Magazine down to the salon and she styles it. It’s the first time in my life I care what my hair is doing! But the style is also practical for my health condition i.e. low maintenance. Everybody wins.”
After speaking to Lisa for this feature I was struck by how dedicated she is. I love the way she goes against the conventional view, and proudly wears her Tennant suits.Good on her, I say!And how it goes to show that you don’t have to fork out a fortune to get a respectable range of cosplay garments: charity shops can be a hidden goldmine!

With thanks to Lisa for sharing her thoughts and
Tennant suits with us.

Posted by Steven Ricks Tailoring at 13:26

Labels: Honest Dragon, Me and My Tennant Suit, Suit owners