Me And My Tennant Suit - Justin Monk

Following my request to hear from other proud Tennant suit owners, I am now pleased to present the first contributor.
I have been in touch with Justin over the past few months and he has offered me a lot of helpful advise for getting my suit spot on.
Here he shares with us his own personal quest for the perfect Tennant suit! 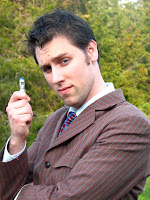 Justin is a seasoned cosplayer, and has costumes ranging from Stargate: Atlantis (seen right, Justin strikes an uncanny pose as Lt Col John Sheppard) through Anakin Skywalker from Attack Of The Clones (seen below left), to Doctor Who.

“My first costume was a Jedi costume, which I painstaking researched, finding all the details here and there.” Justin (like me) is a complete perfectionist and went through five belts, four gloves, three tunics, three boots, two sets of pouches, three inner tunics, and two robes before he was totally happy.
He got his current suit Tennant suit in November 2008, in time for Chicago TARDIS convention. He had a previous one made in 2006, but more on that later.
“The suit is unique, vintage looking and overall something more interesting than the typical two-button suits around.” he told me, “I also have been told I look a little like Tennant, much moreso than the other Doctors, so good fit!” And why not!

When shopping for his suit, Justin was looking for details, accuracy and comfort, something he felt was not available in the current crop of replica suits. His solution was to commission a close friend to make the suit for him, to his exacting specification, using the Jo-Ann fabric (see below). 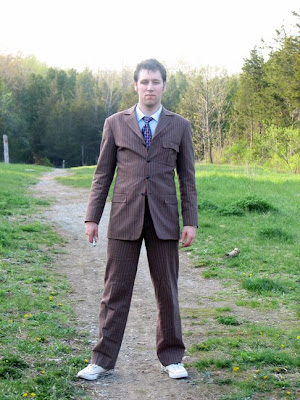 The finished result is a very good fit, in fact Justin says it fits, “VERY well, almost like a glove. It offers such a unique look that it gives such a nice style to everyday suits.”

At the same time as taking delivery of his Jo-Ann fabric suit, he also got
one in blue (see left), though this turned out a bit darker looking than hoped. The material is dark navy blue with a visible red pinstripe, which can be seen a little clearer in his online gallery here. He also wore it to the Chicago TARDIS convention.

He makes the point of wearing it every other week or so. “I wear them as suits... so Church, occasions, weddings etc. They are finely made suits and look great!” But even when he wears it to occasions like those, there is a hint of naughty subversion going on: “That no-one knows its from Doctor Who!” I guess they look but they do not see.
The influence of David Tennant over younger people to wear a smart suits like their hero is something Justin can see happening, “Some for sure, some still see it as a costume and I am sure some now see suits in general more adventure hero now than they have before. Personally, now I have an excuse to wear my Chuck Taylors with suits!” 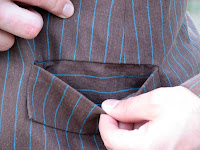 Being a perfectionist to my own heart, Justin can always see room for improvement in his suit. “As a well known nitpicker... yes, there are things that disappoint me... on my next version of the suit I will correct all three jacket pockets, slight things wrong with it as it is, positioning etc. I would give myself a dedicated Sonic screwdriver position so it does not flop around.” 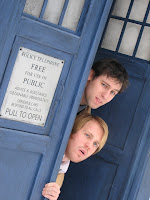 Looking to the future, would Justin consider replicating Matt Smith’s costume when we finally get to see it? “Depends on how he looks compared to me and how the costume is, however I am sure I will stick with ten.... so many details still to nail!”
He hasn’t stopped at just having a replica suit, in 2006 Justin also has his own TARDIS! (see right)
I must say that he surpassed himself with this - I honesty thought he had gain access to an original new series prop! 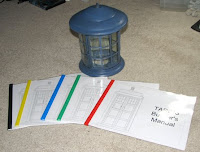 Justin built it himself from scratch based on plans he sourced online from The TARDIS Builders Workshop Manual.
Again, stopping nothing short of perfection, he went to enormous trouble to find the right light housing for the roof (see left).
There is nothing inside, but the outside result is stunning.
The following photos (see below) were taken with a friend who is in the early stages of getting a five costume together. The snow setting really adds something I think, reminding me of Revelation Of The Daleks! 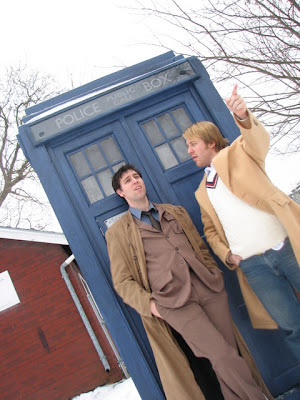 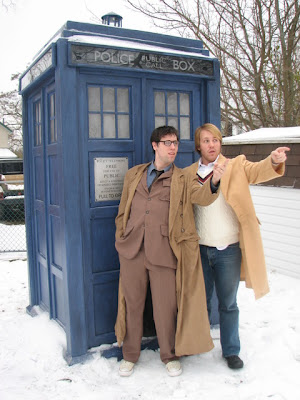 The costume seen in these TARDIS photos is Justin’s first suit and coat, “made by my mother-in-law a week before a local convention in 2006!” he proudly told me, “The coat was made from shower curtains that were suede-like. The Suit material I found online was REALLLLY close... at the time.” 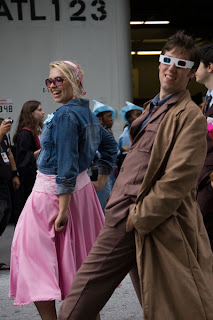 “I actually helped a lot with the coat, but that’s because I wanted the darts etc. It was a rush job but worked out great for the time.”
“I took the costume to Dragon*Con that year and it was great fun as well as I just got 3D glasses in!” (see right)
Justin even starred in a short skit, which can be seen on YouTube.
Since then he has commissioned a new replica Tennant Coat, “It was made by a costume maker in Argentina,” he told me “who I have been wrestling with certain details... he also go a number of them right though, like the pockets, which are nice an deep!” 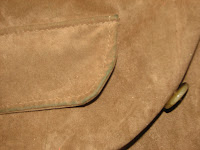 The coat is made from a good matching faux suede, though he has had some problems with the fabric wearing badly, “The coat is my major concern, the fabric rubbing away is not good.”
It would appear the flecking of the faux suede is becoming worn from the backing (see right). This is such a shame, as he has gone to enormous effort to get the cut of the coat right. It also drapes very well (see below). 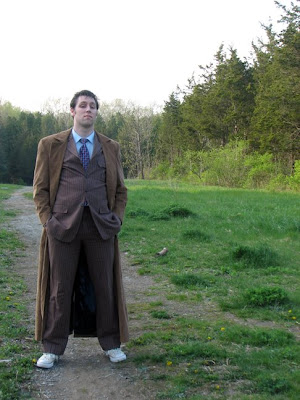 Critiquing his own coat, Justin told me, “I know I need a single seam at the side, the side darts, and the split needs to be better, things I have already talked to about with him. My biggest issue is finding good fabric.” Something I can relate to, having hunted high and low before finding the right stuff.
Justin has a new version of the coat already in the pipeline . . .
“I am not done with my suits either! I am sure better fabric will come along to allow me to sell these and make new ones!”
Now THAT’S a perfectionist!!!!!

With thanks to Justin for sharing his Tennant suits with us.

Posted by Steven Ricks Tailoring at 11:10

Labels: Me and My Tennant Suit, Suit owners