Me And My Tennant Suit - Dan J


After last month’s profile of Tennant Suit owner Justin Monk, we now move to New York to meet our next proud owner, Dan. 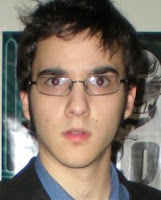 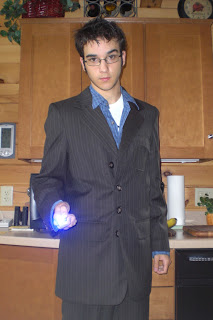 Dan bought his current suit from Baron Boutique in January 2009, but his first Tennant suit was purchased through eBay a few months earlier.
“It wasn’t Honest Dragon”, he told me “but one of those similar sellers. What I liked about this one was that it was cheap, and actually had a bit of blue in the pinstripes! (see right) The fit wasn’t good at all though so I decided to upgrade.”
When choosing its replacement, Dan was less interested in finding a cheap suit, “The most important things for me were fit and color.” he said, “It needed to have that trim fit and the unmistakably blue pinstripes.”
“Props and costuming is a hobby that I’ve been in for a long time and this particular suit (David Tennant’s) was just too unique to pass up. It really reflects the Tenth Doctor’s character, how it may look normal from a distance, but up close and personal there are quite a few oddities (i.e. blue pinstripes). I also just can't get enough of Tennant's Doctor!”
Dan cast around, and eventually settled on the version from Baron Boutique. 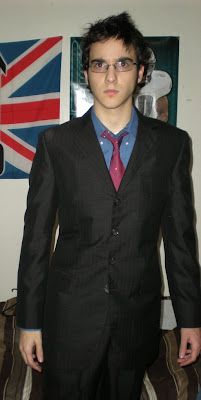 So how did this one fit compared to his first suit? “Brilliantly!”, he grins! “Baron Boutique’s ‘snug’ option did the trick. It’s a little on the long side, but I’m sure I could have that tailored out if I wanted to. Still, a fantastically fitting suit that gives just the right look.”
“The fit is my absolute favorite part. They really nailed the measurements to give it that Tennant-esque fit.”
There has been some question about the fabric used by Baron’s on their suits. Dan thought, “The only thing I'm a little disappointed in is the color. It's a little dark all around, both with the brown and the blue. I have never really worn it outside in daylight though so I am very curious to see how it will react to that.”
And now Dan has his favorite suit yet, how often does he get to wear it? “Unfortunately very rarely.” he confessed, “I’ve worn it to a party or two and once while filming a movie but that’s about it. I don't have many suit-required events in my life at the moment.” He did admit though that he would wear it to “Any event that requires a suit (or costume)! Sadly no such events are coming to mind at the moment... !”
But by the sounds of things, stepping out onto the streets of New York in his Tennant suit is something he enjoys doing, though “I like that feeling of kind of blending in, but kind of not. It is a suit, and at least around here that is perfectly acceptable attire to be walking down the street it, but at the same time it’s wildly unique, both in color and design. I feel a little bit closer to my favorite fictional character whenever I wear it. It’s like I’ve taken on his attempt to blend in with society. It’s kind of nice to know something that no one else around you knows.” 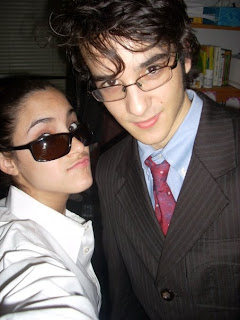 Finally, thinking ahead to next year when Matt Smith takes on the mantle of The Doctor, I ask if he would be tempted to switch allegiances and dress like him. “I don’t think that I will dress like him. If anything I will where the Tennant suit MORE to keep the memory of Ten alive!”
“I think that it depends on one’s favorite Doctor. Everyone has a favorite, and I think that if they are into the costuming thing they will try to emulate that one in one way or another no matter how matter how silly or grunge they may be.”

With thanks to Dan for sharing his thoughts and
Tennant suits with us.

Posted by Steven Ricks Tailoring at 09:56