These pockets are the most curious and unique aspect of this suit. They defy convention and are hard to describe. Luckily, I was recently sent some pictures by a friend, Lisa, who took a closer look at the blue Tennant Suits on display at some recent exhibitions.
My inspection of the suit at the Earl’s Court exhibition had been somewhat limited since it was covered by the overcoat. Lovely as it was to get up close and personal with the coat, it made a detailed study of the suit impractical.
However, the exhibitions Lisa went to had the suits displayed without the coat, so it was a lot easier for her to take detail pictures without being too invasive. 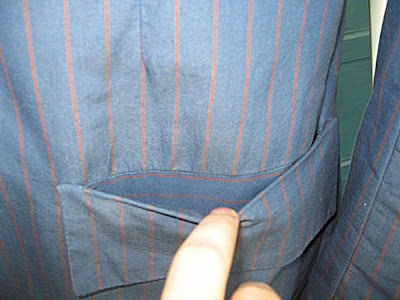 This first shot, looking down into the left-hand pocket, clearly shows the flap on the outside of the pocket (see above). Note that the material inside the pocket has horizontal stripes.
The next shot shows the right-hand pocket in the same way (see below). Note that this time the lining has vertical stripes.
These are actually two different suits displayed at different exhibitions. 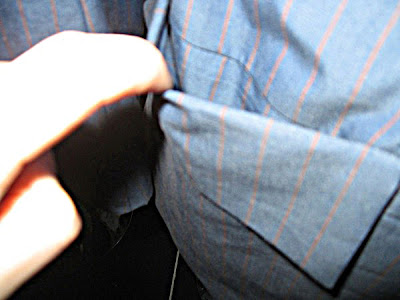 Personally I think that it is purely an error of assembly when one of the suits was made, but working out which is ‘right’ and which is ‘wrong’ is hard. I have some ideas, but more on that in a later posting. 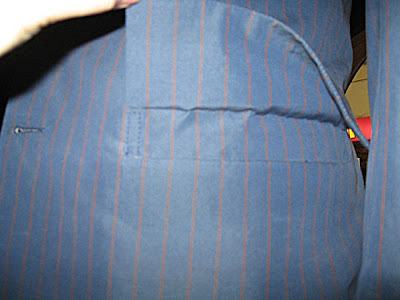 This next picture (see above) with the flap inverted, is very useful. It reveals the welt position, ie the point where the body of the suit is cut through.
It is approximately 1 inch below the fold of the flap, and you can see the seam where the flap is sewn in and is held vertical by two narrow rectangles of stitching either side, before it folds back down to cover all this up.
This horizontal seam corresponds to top of the pocket lining which was sewn differently in the two previous photos.
Note also how accurately the stripes are lined up between the body of the suit and the underside of the flap. That’s going to be fun to do! Joy.
These three photographs clarify and simplify the construction of the pocket for me, making its replication vastly easier.
So, to making the pocket.

I am going to do it in calico on a random patch of fabric as an isolated test to establish the size and pattern. 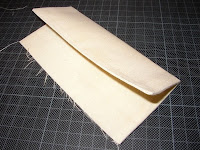 I have worked out that the flap needs to be 6 inches wide, so I have made it to size, and 5 inches deep (2 inches for the flap; 1.5 inches for the return fold; and 1.5 inches for lining into the pocket). I then firmly press the fold of the flap before installing it (see right). Pressing it later when it is finished may result in over-pressing the rest of the pocket which will look unsightly. 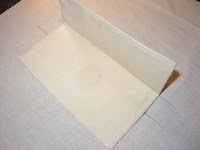 I have then cut a large square of calico to do the test pocket into, on which I have marked two horizontal lines: the top one for the level of the top of the flap; and a line 1.5 inches lower where the flap is welted in (see left). I have also marked the vertical sides of the pocket to the exact width of the flap. The picture shows the flap lightly placed in what will relatively be its final position.
I then cut the back of the pocket lining to 1.5 inches wider than the flap and 3 inches deep, this will then hanging into the pocket to the same depth as the tail of the flap. 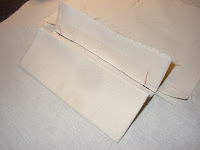 These are then sewn into place as with a standard welted pocket, sewing to the exact width of the flap and no wider.
The picture here (see right) shows the flap sewn in place, rotated over on itself. When the flap is turned backwards through the welt, it magically rights itself. You can also just see the pocket backing, again rotated upside down, ready for sewing.
The pocket opening is then cut as usual and the flap and backing turned through the slit to their final positions. 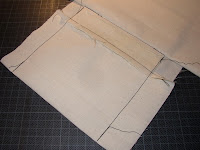 Between the bottom of the tail of the flap and the pocket backing I sew the pocket lining (which will ultimately be cut from black silesia).
I then sew the internal vertical sides of the pocket, the top inch of which is only a couple of millimetres inside the width of the pocket flap (see left). 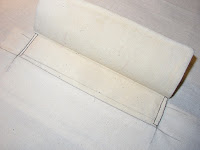 The triangles in the pocket slit are conventionally turned inside out and sewn with the vertical stitching. I now realise that for this pocket they remain facing inwards and are caught and sealed in place by the rectangles of stitch that can be seen when the flap is lifted up (see right).
All in all this has all been surprisingly easy pocket to assemble, especially now that I have got into the mind of the pocket and how the Faux Flap works.
It is not a conventional way to do a pocket and needs a little thinking outside of the box.
Lastly, here are some comparison images of my test with the images Lisa sent me. 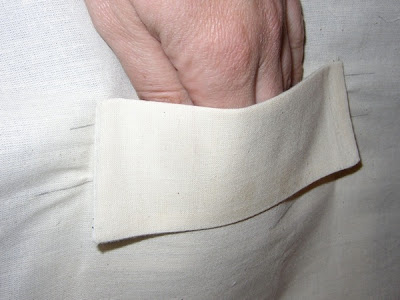 Enormous thanks to Lisa for sending me her images of the suit pockets. They were invaluable. If you think you have some similar images which may help in getting the details spot on, please get in touch by emailing me at tennantcoat@me.com.
Posted by Steven Ricks Tailoring at 13:34