I was going to call this entry: “Well that’s annoying!”, but luckily I pulled things back from defeat.

I previously posted that I am making a pair of Six trousers before doing the ones for the suit, so I can get some practice in. 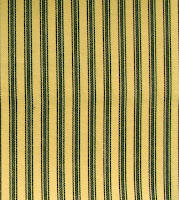 From the Six Breakdown on dw_cosplay I had found and ordered some of the Yellow Ticking (see left) from Interior Mall.
Their website says they ship worldwide, but do not quote shipping prices, asking you to enquire direct for a quote.
When I got a reply I found their shipping costs to the UK were very over priced at US$58 for sending just 4 yards of fabric (value US$70).
Luckily I have a friend in San Diego who had something to send me and he agreed to take delivery of the fabric and add it to the shipment before dispatching it to me.
This simplified things, and I can’t thank him enough for making that happen.

Before forwarding it on to me my friend thought the material was not quite right, saying his recollection of Colin Baker’s trousers was that they had a single stripe. I had always thought this as well, but had found that the trousers he wore for his first season were actually a triple stripe: two narrow ones either side of a thicker one. A nice clear image of this can be seen on DoctorWhoProps.com (see below). The Interior Mall fabric looked to be a good match.

He also thought the colour was a little off, but I’d have to see that to know what he meant. 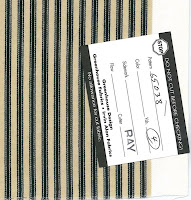 The packaged arrived this week, and to my horror I saw exactly what he meant.
It was totally the wrong colour! Instead of being a vibrant yellow it was a light oatmeal instead, and looked to be a match to another colour on their site, the swatch for which can be seen here (right). 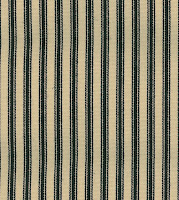 This was really annoying – thanks Ray (who cut and packed it according to the attached ticket). Pillow ticking, as this fabric is known, is relatively commonplace, and I had found several suppliers in the UK (Tinsmiths had a good range) though they did not have the right yellow with black stripes. So I had only gone to Interior Mall for the colour!

So all that effort was effectively for nothing.
Urrggghhhhh*@!

Instead I have decided to bite the bullet and buy some new ticking in the UK (from John Lewis) that is white with black stripes and dye it to the right colour, something again I have never done before, so this will be an experience and a challenge.

In a Comparing Fabrics style, here is the Interior Mall fabric (below top) compared with the UK-sourced John Lewis ticking (below bottom).

In hindsight I think the Interior Mall fabric has the stripes too close together anyway (see above). I am also not keen that the stripes are printed, not woven as I had found with the replacement UK-sourced fabric.

I found some colourfast Dylon fabric dye in Sunflower Yellow (which sounds nice) at a local wool shop (see left). This can be used in a washing machine at 40degrees. I also need to buy 1lb of salt, which is used to open the pores of the fabric and make the dye fast.
This is one of the occasions I think reading the instructions on the packet would be wise (being a man I don’t often do that). 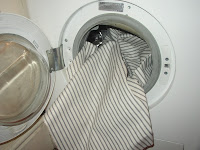 First I need to wash the fabric thoroughly, to make sure there is no grease or dressing on the material, this will resist the dye and make it come out patchy.
I then empty the entire packet of dye into the drum of the washing machine, add 1lb of table salt, then the still wet fabric (see right). 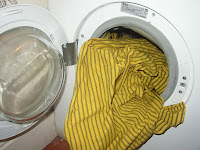 I then have to wait a nerve-racking hour for the machine and dye to do its magic.
Once the hour is up it’s time to see what‘s happened, and I am pleasently surprised to find it has worked a total treat. My white and black ticking is now yellow and black, and the dye has not tainted the black stripes as I secretly thought it might (see left).

I just then need to leave it out to dry then thoroughly press it to make it pristine and ready for use (see below). 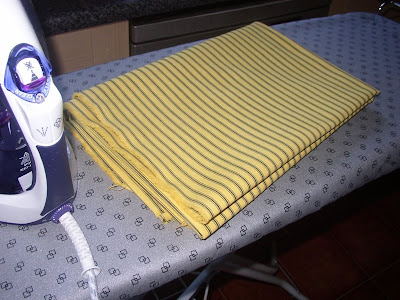 In the long run, I think I have now ended up with a better fabric than I ordered from Interior Mall. It is a proper woven pattern, and as a result the pinstripes on it are nice and sharp. Achieving the colour was nowhere near as scary or difficult as I thought. I think this is an exceptional case, but I would consider doing this again if finding the right pattern/colourway was a problem. If a white colourway was available as an alternative, dye it to the right colour is now very much an option!

Finally, comparing my fabric to a detail close-up of an actual pair of the Colin Baker trousers, I think I have got a pretty good match!

Posted by Steven Ricks Tailoring at 08:24