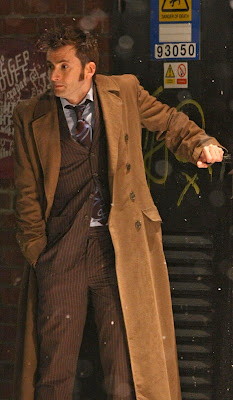 Last time we heard from Louise Page, she told us the story of Tie Four, the popular swirly tie.

She explained how when she bought it, it was the last tie in the shop, so lacking repeats for stunt-doubles and damages, she used it sparingly during the Tennant era.

But the story doesn’t quite end there.

Being her (and David’s) personal favourite, it was first choice for the Tenth Doctor’s closing scenes.

Louise now shares with us the background to the Tenth Doctor’s emotionally charged departure. 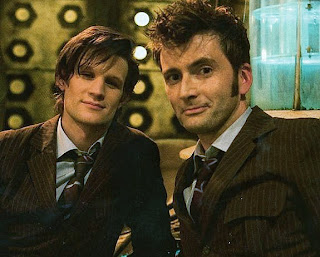 Filming for The End Of Time allowed for the only opportunity for David Tennant and Matt Smith to appear together in a unique publicity photograph.

As you can see they are both wearing the Christian Lacroix tie - but how is that possible if there was only one?

Louise Page explains how sometimes the camera can lie . . .

You can now hear about how the tie appeared
in the subsequent story, The Eleventh Hour,
over on my Eleventh Doctor Blog


When is Tie Four not Tie Four?

Posted by Steven Ricks Tailoring at 22:05