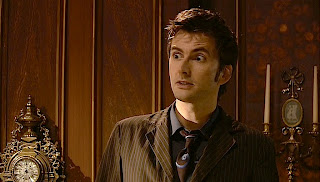 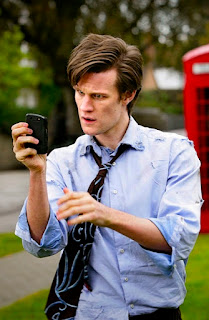 The first draft of the tie, released around December 2009, was based on publicity photographs and guesswork, but produced a very acceptable result.

It is woven, with the swirls and background in totally solid colours, but I can confirm neither if these are actually correct.

The area of artwork, and thus pattern repeat, is fairly limited, due mainly to the lack of images of the full area of the design. The first six or so inches stand up well, but it quickly gives way to increasingly inaccurate guesswork, working from what was available at the time.

Buyers criticised it for not having the reddish areas and lacking the depth of relief the swirls appeared to have, but this was based on the spied filming of The Eleventh Hour, when Matt Smith wore the Ray Holman replica tie as outlined in my introduction.

Since Matt wore his tie without a jacket it was more visible; whereas David’s was mostly concealed by the buttoned-up suit. It was assumed (wrongly) that they were the same tie, so Matt’s was used for reference for both.

In response to online comments, a second draft of the tie was done in July 2010 to address the wants of cosplayers, and tried to represent the embroidered relief of The Eleventh Hour tie. Efforts were also made to include the red areas.

The existing swirl artwork was retained, and expanded upon, based on a flat image of the Eleventh Hour tie. This was a much welcomed improvement over the first version.

I gather a number of attempts were made to create the reflections and shading the embroidered swirls produced, with a limited level of success.

The final version did a good job and the red areas were included, but come out too light in the released version.

My conclusion is that the second draft tie stands as a good tie, but fails to replicate the three-dimensional relief of the Matt Smith version.

Although the original David Tennant tie is all woven, like the Magnolis, the red areas should be much more subtle than seen here, with the brown background a lot darker. The overall swirl artwork is good, if a little large and heavy going. It still stands up today, though there is room for further improvement, if another version is produced. Posted by Steven Ricks Tailoring at 08:30