A name HIDDEN IN PLAIN VIEW!

THIS IS NOT A SPOILER!
Despite the initial tone of this entry, there are no spoilers relating to any unbroadcast episodes

With the Tenth Doctor’s ties very much back in the news lately, I have come across something I had never previously known - and something which if you’re a Tennant fan know you will kick yourself over.

The final episode of Series Seven, due in only a few weeks, is titled The Name Of The Doctor and is already dividing fans before the plot is even truly known.

Back in The Wedding Of River Song the disembodied head of Dorium made his ominous prediction:

Well - this hasn’t ANYTHING to do with The Name Of The Doctor, but it does relate to names in plain view.

One of the most popular ties worn by the Tenth Doctor was Tie Four, the Christian Lacroix - commonly known as the swirly tie.

Well, it appears there is more to those random swirls and patterns than meets the eye.

I came across a listing on eBay for old Lacroix tie dating from the 1990s - and it has a very interesting label inside the lining of the tie.

The logo incorporates an abstract twisted line, something very in during the 1990s, forming a C and L for Christian Lacroix - and it is a perfect match to the swirl at the bottom of the Swirly tie!

That bottom piece of the design IS the Christian Lacroix logo, bold as brass, three inches square - HIDDEN IN PLAIN VIEW!

How did we miss that?! 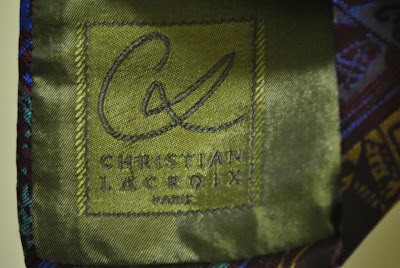 Posted by Steven Ricks Tailoring at 10:37