My deadline for the Ultimate Tennant Suit was to make sure it was ready for Kevin Coppa to wear at this year’s Gallifrey Convention.
With just a few days to spare I got it done, and he was able to proudly show it off for all to see. 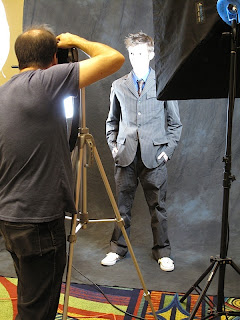 The convention has several trails you can follow, depending on your personal interests. As part of the cosplay events over the weekend, Scott Sebring brings his professional camera equipment along and offers a free portrait service for anyone in costume!

Kevin had his chance to get get some great pictures of him wearing his Tennant Suit, as well as a Tennant Coat I had made him.

First they did some portrait shots of just the suit (see below).

Then they did some more action-type shots – Kevin showing off his Tennant poses! (see below)

Finally, they did a batch adding the coat, with a mix of portraits and action, the latter ones getting quite wild! (see below)
Out of all the shots taken, the follow three stand out.
This final shot is a clever mix of the lower half of one shot (better for the coat) and the upper half of another (used as Kevin’s hand had obscured his face).
Isn’t Photoshop a wonderful thing!?

Posted by Steven Ricks Tailoring at 20:24