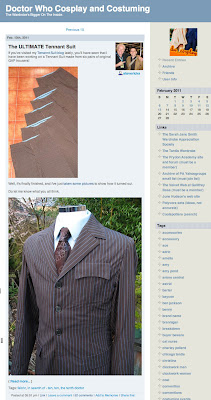 The photos of the finished Tenannt Suit have caused a bit of a buzz.

To bring the pictures to a wider audience, I posted them on a couple of forums, one of which within a couple of hours had received over 20 responses!

This also drove a fair bit of traffic back to my blog, which was hoped, but unexpected.

I was able to look at the internet traffic to my blog and was astonished by the spike of hits I was getting.

Below you can see the traffic for the week, ending with the increased level only hours after I posted the pictures. 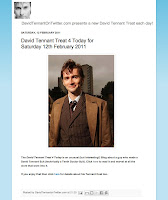 I then became aware that a lot of traffic was coming through a posting on David Tennant Treat 4 Today! (see left).

It was exciting to think I was getting some recognition for what I had made.

Looking deeper into the referral URLs also turned up that I had been spotted by a Russian Doctor Who site! Yes – RUSSIAN! (see below)

Now my Russian is not very good – okay, so it’s non-exisitant. But I put the headline and intro text through a few translation sites, a lot of which chucked back

But one gave me the following, which seems a little better (see below). 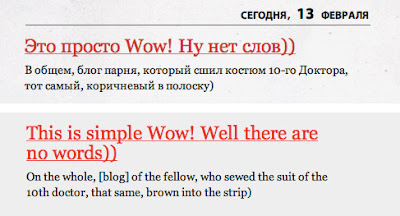 Thanks goes to everyone who’s looked in to see the story behind the Ultimate Tennant Suit – I hope you found it interesting.
Posted by Steven Ricks Tailoring at 23:23