I was reading some of the Doctor Who news feeds recently, and something caught my eye.

As cosplayers we are always on the look out for good quality, unembellished photo reference to get those costume details spot on.
The launch of each new series is accompanied by such images, and we pour over them for the insight they give.

Well, this month Titan Comics are launching a range of New Adventures With The Tenth Doctor graphic novels and the cover of issue one has a real nice image of David in costume - an image I don’t recall seeing before.

What we often forget is that for every image we did get to see, there is likely a dozen shots not for public view where the actor isn’t quite looking their best, or the pose just doesn’t fit with what the publicity people want us to see at that time.

The first issue has a number of alternative covers, which are all graphic based.

But for one of the covers it seems Titan Comics have gained access to some of these previously unseen photoshoot images. I hope we get some more gems on the coming issues. 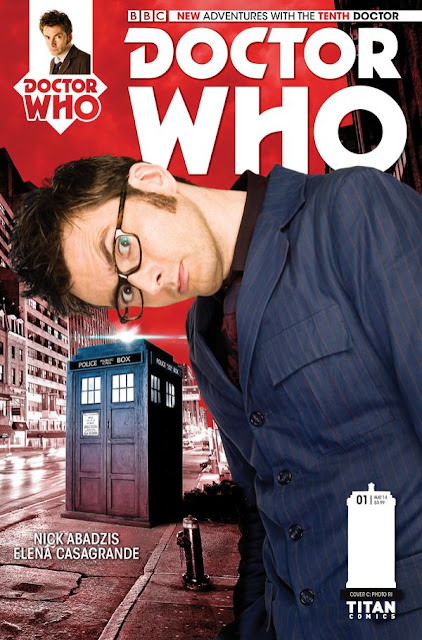 Issue one has an image of David in the blue suit, with the Kenzo tie and burgundy shirt.

Aside from the glasses, this matches publicity portraits to accompany the series four two part story, Silence In The Library.

He’s in an unusual stance - maybe a little off the wall and not entirely in the style of David’s typical poses as the Tenth Doctor.


FOOTNOTE
No sooner has this first issue hit newsstands (and sold out) there is already an exclusive cover variant of the Tenth Doctor conjoining with the Eleventh Doctor to make a single, and very clever image. 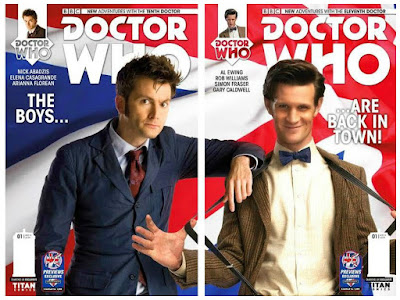 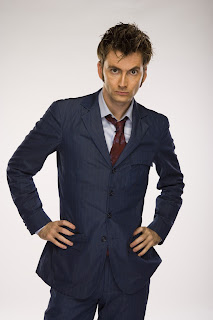 Remembering that these poses are from photoshoots taken several years apart, they are very cleverly chosen to create what appears to be a single photocall with both actors together.

It has you wondering what David was leaning on to get this pose.

Again, check out his fringe and how it matches the sample shown here.

Posted by Steven Ricks Tailoring at 16:10