The launch of Titan Comics’ New Adventures With The Tenth Doctor graphic novels series seems to have gone into overdrive, with multiple cover variants to be had.

Last month’s San Deigo ComicCon often has convention exclusives, and Titan Comics jumped on the band wagon with not one but two sets are variants.
Both versions join with the New Adventures With The Eleventh Doctor to make a single panoramic image. 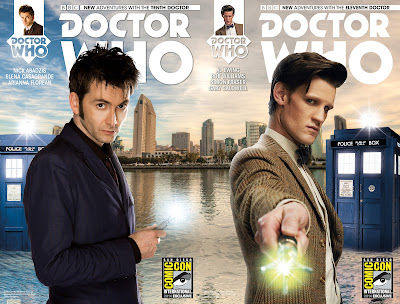 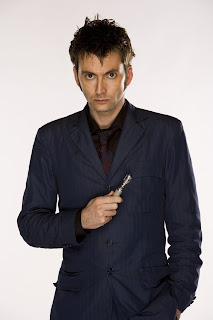 The first variant has The Doctor in his blue suit, worn with the burgundy shirt and Keno tie, wielding his trusty sonic in a pose I haven’t personally seen before.

This combination relates to the series four two part story Silence In The Library.

David’s hair seems to match the composites with Alex Kingston as River Song as show here. 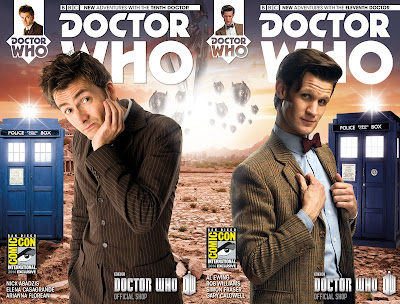 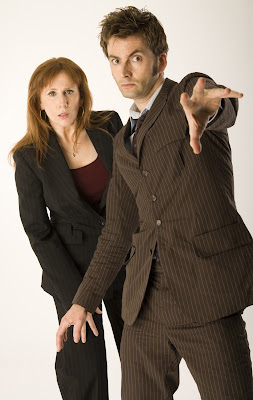 I think the second variant (which was only available at the BBC Shop stand) originates from the photoshoot at the start of series four with Catherine Tate’s Donna Noble.

This too is an image I don’t recall being published before - probably due to its pose being so candid in nature.

Again, if you look at David’s hair it matches the photo shown here.

FOOTNOTE
Not to be out done, Forbidden Planet in the UK had their very own variant based on the BBC Shop version. 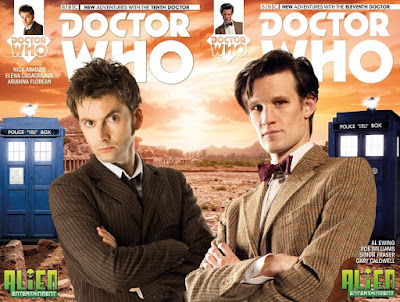 Using the same background, it has yet another previously unpublished image from the series four photoshoot.
Note again how David’s hair matches the sample shot above.

Posted by Steven Ricks Tailoring at 21:07