The Flurry of St George

So this will be my little rant, effectively about supply and demand.

I’m finding the latest developments about the St George by Duffer tie worn by David Tennant in the upcoming 50th Anniversary Special to be more than a tad interesting.

Between 2006 and 2009 when David was flying high in the role, the rise of the cosplayer dressed in a brown suit and long trench coat became a convention sight more common than not.
But for some reason the ties worn were not in their crosshairs until after he had departed the role.

The turning point was the 2010 Bonhams Doctor Who Auction where a small but nonetheless significant lot of Tenth Doctor ties were sold. They were significant not for being made available, but for the sheer fact the accompanying text listed the labels, blowing the lid on the manufacturers we should be looking out for - Daniel Hechter, Rocha John Rocha, St George by Duffer and Thomas Nash.

Pandora’s box was opened and the fan-machine that was in place following Matt Smith’s costume (the Paul Smith shirt; TopMan trousers; All Saints boots; G-Star RAW trousers etc etc) soon was on the case.

Even today, original St George ties as seen in Utopia crop up on eBay. Previously gaining over £200 a piece, they have more recently gone for a less eye-watering £50 as this listing demonstrates.

Doctor Who Tenth Doctor Tie
Brown background colour with diagonal floral pattern. This tie was a gift from a friend a fellow doctor who collector to my husband. tie is in excellent condition but has no label on the back.
Seen in the episodes Utopia , The last of the time lords and The sound of drums.
This is not the anniversary tie , one sold for over £225 on ebay. 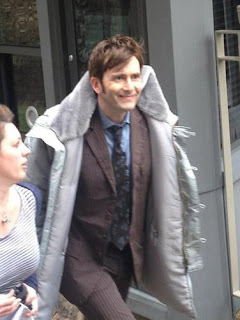 Fast forward to this year, and within a day of filming with David Tennant on set for the Special, the new tie was spotted; identified; ordered and if lucky, bought in-store at Debenhams branches across the UK.

Before the end of the week, photos were on forums, Twitter and Facebook showing off proudly found ties.

Variants were spotted; widths were analysed; alignments of patterns were scrutinised, all endlessly debated on the forums.

But as fast as they were appearing on forums a similar number were popping up for sale on eBay, and for prices more associated with the rarer originals from 2006 to 2009.

To show just how numerous they were, here is just a selection of seller’s images from their listings.

Where previously the ties were identified after the fact - we now have a tie which is still available in-store. As a result most cosplayers who want one can get one either by walking into a branch of Debenhams or buy one from eBay.

Admittedly these are often at double their street-price, but that is still below the average price of the rewoven replicas found on the net.
Quite why you’d buy a replica of this tie when originals are so prolific I don’t know.

Anyway, to stand out in a crowded marketplace, I’ve noticed a number of eBay sellers coming up with novel ways to display their ties. Some on mannequins with Tennant suits; one even playing on the British heritage of the show by using a Union Jack as a background.

But if there was a prize, I would give it to the listing that used the photo below. Very creative! 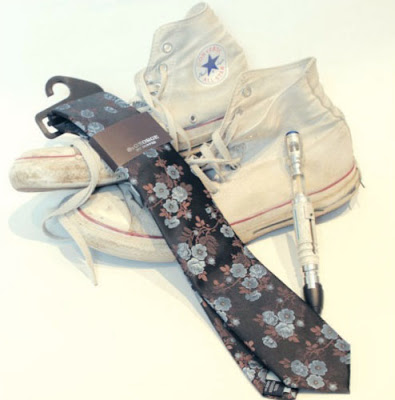 If you want to look for a St George by Duffer tie on eBay,
you’ll find these links useful

Posted by Steven Ricks Tailoring at 13:49