Tennant cosplayers are a canny bunch.
The Tenth Doctor’s costume can be blocked in very easily with a brown suit and a pair of readily available Converses. 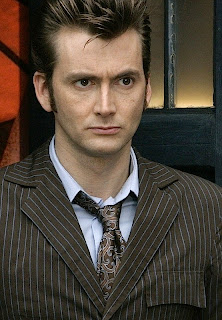 But the one thing they crave are the ties - screen accurate if possible - if not then a good replica.

Not all the ties have been rewoven, and even fewer originals come up on eBay, so if there’s a third way the Ten cosplayer will find it!

Well one of my readers, Simon Richards, has done just that by making his own copy of his favourite tie - the Thomas Nash tie worn in The Idiot’s Lantern.

Here’s how he went about making it. 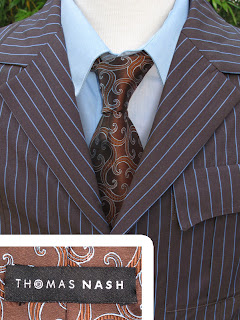 The Idiot’s Lantern... great episode, great scooter, great clothes, great tie and great shades of Elvis. With lots of humour, anger and emotion this Tenth Doctor episode is easily one my favourites. I have been a Tenth Doctor cosplayer for a good few years and whilst my collection of costume pieces increases, The Idiot’s Lantern tie has always intrigued me. The main problem was always not knowing what the tie actually looked like. During the episode it is very tricky to identify the whole pattern.

Thanks to Steve’s Tie Index this tie, for me, became a little more obtainable. I had tried to look for the original screen accurate tie by Thomas Nash but soon realised this was going to be a very long, expensive route to go down. I decided, therefore, to make my own version.

Using reference images from the Tie Index blog, screen captures and of course every cosplayer’s favourite tool... Google, I took the time to collect as many high quality photos I could.
I chose to use one which showed the pattern up close in detail. I measured one of my other ties for size and adjusted the image to the correct scale. This meant that when I printed the image at 100% it would hopefully map out exactly the correct size of the tie. The hard part here was continuing the pattern in full because all reference images do not show the full length.

I decided to trace from the print out onto some paper using my window for a light box. I taped the pages together and then traced around my existing tie to get a rough outline. 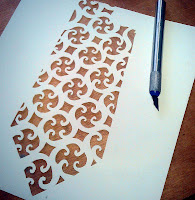 From this point I needed to create a template so I could transfer the pattern onto the tie itself. Using my pattern on paper I scanned the images onto my laptop and bought some plain card. Printed the images again at 100% and then attached the card together like before. 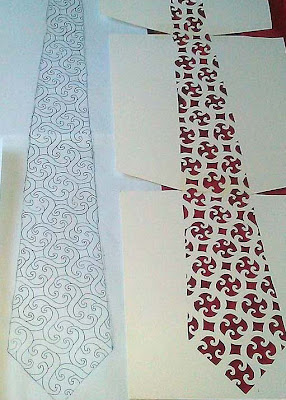 Using a board and a scalpel I carefully cut out the design allowing me to see the pattern in full.

From this point I pretty much had my tie all planned out so I went ahead and bought a plain brown satin tie, metallic gold and metallic blue ink pens. 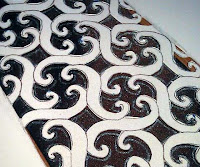 Once my tie arrived I set to work attaching the template over the tie to hold it steady as I began tracing out the pattern markings. The outcome looked rather amusing and a little Gallifreyan. 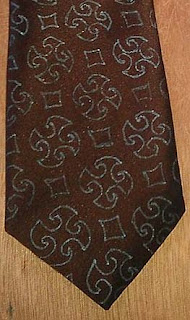 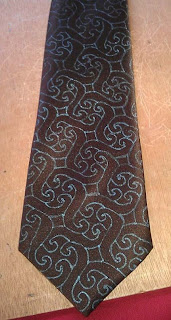 My next step was a little frustrating as it involved filling in the lines between the design to fill out the S shapes. Once this had been completed the tie became very Idiot’s Lantern. 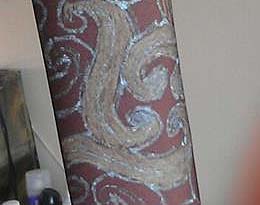 Using the gold metallic ink pen I bought I then began to fill in the S shapes to bring the pattern to life.

I was quite worried that it looked slightly messy but as I continued and eventually put in a blue line through each S shape the tie took shape rather nicely. 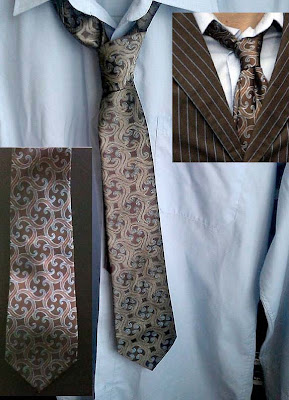 It may not be 100% accurate or very tidy but this was a fantastic little project to work on and I’m very happy with the outcome! 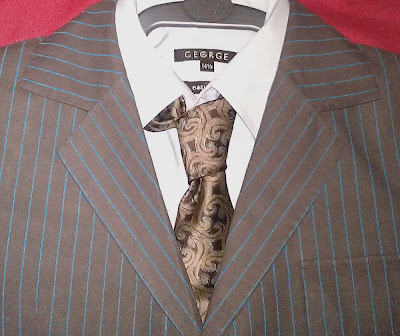 Have you made yourself a tie in the same way - using a blank tie and fabric pens?
If so I’d love to hear from you.


Email me at tennantcoat@me.com
and we can look at getting you in my blog!

Posted by Steven Ricks Tailoring at 11:05