This month sees the release by Magnoli Clothiers of a second version of their Giorgio tie - a replica of Tie Seven (the Giorgio Armani). 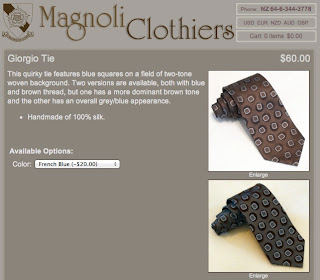 Here is my review

This month has seen the release of a third, and much improved Swirly tie from online costume makers Magnoli Clothiers. It’s a very popular tie with fans, so great to see a decent replica widely available.

Previously they have gone through as many drafts of their replica of Tie Two (Daniel Hechter).

This demonstrates a level of dedication to review and revise their ties, each being a step up from the previous.

I wish I could say the same for the latest version of Tie Seven (Giorgio Armani) which has taken a bizarre route from the first draft.

Previously a replica had been made, copied directly from an original Giorgio Armani tie, though the source was a different colourway option in blue. 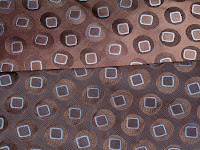 The weave was pretty much bang on, but for some unknown reason the two shades of brown were transposed, making the dominant colour a lighter, warmer brown. 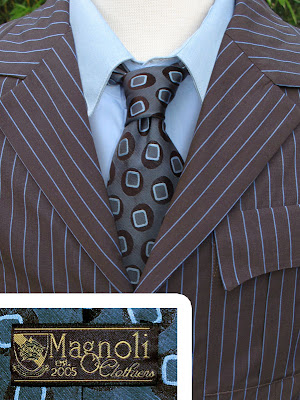 So when I heard on the grapevine a new version of the tie was already in the pipeline, I was excited to see what had been done to improve on it, as only switching the browns would be enough to make it very near perfect.

I ordered my tie, and when it arrived I was what I can only describe as perplexed. The weave is the same as before but the colours have been changed to a dusty blue - just like the colourway option the first tie had been copied from to get the weave correct.

Why on earth this tie has been made I do not know. Maybe someone can enlighten me. But it is a backward step and further from the screen-worn tie than ever.

It’s a same the first draft tie is now out of stock as I would recommend sticking with that.
Sorry to be so negative, but even at US$45 it is not worth the effort to buy it.

Now while we are on the subject of colourway versions of the Giorgio Armani tie, I thought I’d show you ANOTHER variant I found recently on eBay. 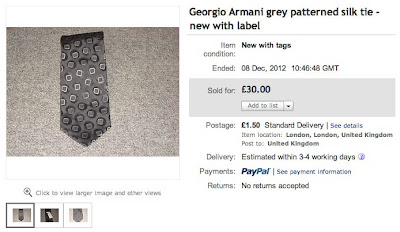 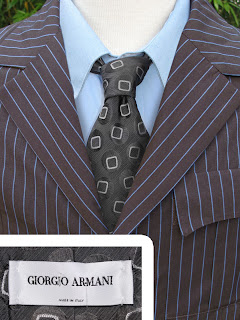 This time it is a version in shades of grey - just three I hasten to add, not fifty!

The tie has a slight warm/pink cast to it, and the weave is exactly the same as the screen worn version, which is in the brown and blue combination.

I have to say this is the dullest tie I have ever seen. The lack of colour is quite draining on the eye and if it wasn’t for the tenuous link to the Tenth Doctor’s wardrobe I would give it a second look.

But it interested me and after speaking to the seller I picked it up for a fair price.

I’m getting quite the collection!

Posted by Steven Ricks Tailoring at 13:14