The return of St George

I’ve spotted something on eBay that has become a rarity compared to a year or two back - an original St George by Duffer tie, aka Tie Ten from my Tie Index. 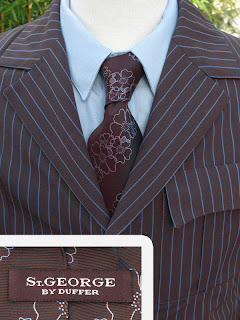 This was one of the few ties that seemed to pop up form time to time, but it’s been a while since I’ve seen one for sale.

The US seller seems to be a Doctor Who fan, as he knows the provenance of the tie and its value.
That said Magnoli does do a passable replica, so the demand for this particular tie has been satisfied elsewhere (though it is currently out of stock).

At time of writing it has a BuyItNow for US$320 - which frankly is not beyond what these ties have gone for in the past - so if you want one NOW’S YOUR CHANCE! 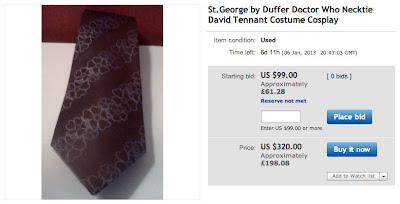 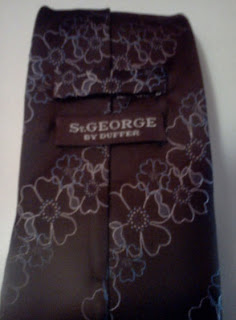 Auction is for one St. George by Duffer necktie, as worn by David Tennant’s 10th Doctor in three episodes of Doctor Who - Utopia, The Sounds of Drums, and Last of the Time Lords, at the finale of season 3.

This item is long discontinued and extremely sought after by Doctor Who fans. Tie is a delicate blue floral pattern on a chocolate brown background. This is also an extremely interesting little tie in it's own right, and goes beautifully as an accessory to your brown suit! One of these ties was worn by John Simm in Life On Mars.

As bidding often becomes competitive for "as-worn-by" Doctor Who items, we have included a buy it now option so you can snap this tie up.
Posted by Steven Ricks Tailoring at 10:03