This month sees the release by Magnoli Clothiers of a third, and improved version of their Swirly tie - a replica of Tie Four (the Christian Lacroix). 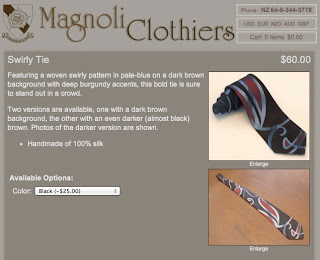 Here is my review


Aside from trawling eBay for the occasional hotly fought as-worn ties; or finding something that is evocative or similar to the tie you are looking for, there is another option – a rewoven copy by online costume maker Magnoli Clothiers.

It has taken several drafts to get the ties to something near screen-accurate.
The earliest version of Tie Two (Daniel Hechter) was printed, and though was replaced with a woven version the pattern was not changed. The latest incarnation is to a better pattern, but is not quite the right colours.

Tie Four (Christian Lacroix) has gone through two drafts to date, though the latter was a woven version of the appliquéd copy seen in The Eleventh Hour, so wasn’t quite right on several levels.

Since February this year, when I found my original colourway version of the Christian Lacroix tie, the pressure has been on to make a more faithful version.

The second draft Magnoli had improved the pattern, but it was out of scale with the real thing, something that was difficult to match without having an original in-hand to work to. 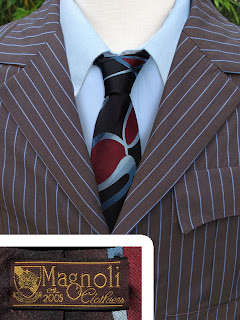 So, using the images from my posting a new version has been redrawn from scratch, correcting many of the errors in the pattern seen in the previous version.

The colour has also been improved, though I’m of the opinion it has gone a bit too far.

The original Lacroix tie is a very dark brown. A real dark chocolate brown, almost black. That description has been taken on board and a much better brown has been used, though this is almost too close to black for my liking, having seen an original as-worn tie close up.

The red patches inside the swirls haven’t been changed much since the previous draft, so look lighter in contrast to the brown. They could have done with being darker, but aren’t so bad I guess.

The scale of the pattern has been improved, but comparing it again to my original, it is still somewhat larger. I don’t know if this is an error that has crept in during manufacture, as ties are cut on the bias so tend to stretch a little after production.

That said, at US$45 this IS the best replica Tie Four to date, so is well worth the money.

The dedicated cosplayers should grab one while you can!
Posted by Steven Ricks Tailoring at 09:15