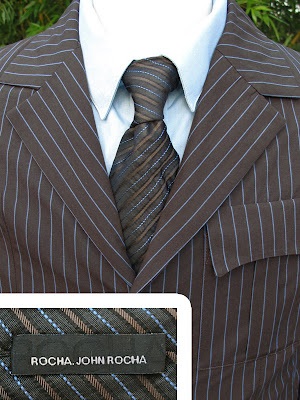 My client was in Great Ormond St Hospital last week visiting his nephew (he was in and out overnight and is doing so well, you’d never even know he’d had an op!). 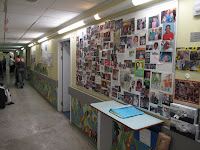 Anyway, on the wall at the end of the corridor on Tiger ward, in amongst the pics of the various celebrities who’ve visited the children, he saw a photo of when David Tennant visited in full costume. 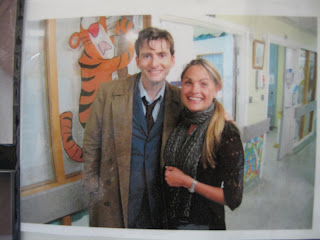 After doing the nerdy thing of standing exactly where he stood, he took a couple of pictures of it on his phone.

It was only when he uploaded it he got a bit excited because seeing it on a full size screen it looked like he had tracked down the mystery fourth tie!

Using a Doctorish (but non-screen used) tie for public appearances would make a certain sense due to the potential value of screen used items.

Unfortunately there aren't many pictures of David Tennant making public appearances in costume, so there's not a great deal of other evidence to substantiate this theory.

But just to confirm either way I went the the hospital today to see the photo for myself, and took my Fourth Tie with me to compare. 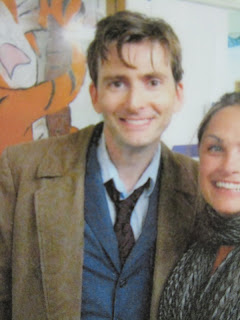 I found Tiger ward, and after explaining my request to the puzzled reception staff I was taken through to the corridor concerned and the pin-board of photos.
Sure enough, down the bottom right is the photo of David Tennant on his ward visit.

Staring intensely at it I could see it WAS the Rocha John Rocha tie! I took a couple more photos, but it is quite a small picture, and it's quite hard to get a decent representation of it in a photo. Still, I CAN confirm it IS the tie and we can finally confirm it was at some point worn by David Tennant as The Doctor - just not in a broadcast episode!
Posted by Steven Ricks Tailoring at 18:19