I was up in central London this week working at an advertising agency, and took a little time out over lunch one day to pop down to Oxford Street.
For those that don’t know the geography, Oxford Street is London’s premiere shopping thoroughfare, and has a number of large department stores within a short distance of each other.

Two that I go to regularly are Debenhams and John Lewis, the latter of which I went to first.
I was popping back to see if they had anymore of the nice purplely ties I got a while back (see the last tie in Tie Alternatives), but sadly no.

In the Bonhams Auction earlier this year there were some shirts David Tennant had worn (lot 47 - shirts from Tooth & Claw), one of which was labelled HIJKLMUVWXYZ, which is John Lewis’ own brand (the J and L are in bold, being the stores initials).
The shirt in question was from their collection that year and they no longer sell anything close enough to substitute it.

John Lewis is, however, one of the few retailers to stock ties by Daniel Hechter (makers of Tie Two in my Tie Index).

I had always wondered if the Timelord tie had been picked up here at the same time as the shirt . . .

Abyway, I then popped to Debenhams to take a look at their tie collections as well.

It was while I was looking around that something struck me. In Debenhams they have a large wall of ties (see below) amongst which are some familair sounding brands, a lot of whom are familiar names in the Tie Index. 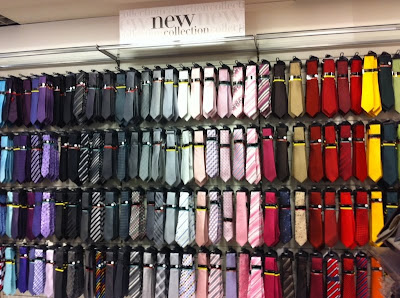 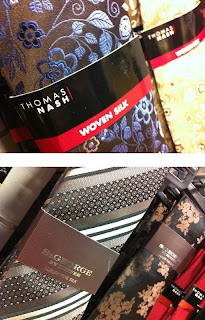 Thomas Nash (maker of Tie Five from The Idiot’s Lantern); St George by Duffer (maker of Tie Ten from Utopia); and Rocha.John Rocha (maker of a tie that appeared in the Bonhams Auction in Feb 2010, though not thought to have been screen-used) all have shelf space in this store. (see left)

It was like that moment at the end of Turn Left, where The Doctor sees the return of the Bad Wolf motif – everywhere I looked at ties, there was at least one of these makers names prominently on display.

I then recalled Louise Page saying that when she was dressing Rose for series two, she and Billie Piper went shopping at Selfridges (just down the road from Debenhams). So I wouldn’t be surprised if THIS is the store where a number of the Tenth Doctor’s ties were bought!

The thing that’s now going through my mind is, of the other tie makers here, are any of these the makers of the unidentified ties, or are any oof the other ties from the makers we already know about . . .
Posted by Steven Ricks Tailoring at 18:49