This week’s Radio Times marks the first item from the recent Bonhams Auction to appear in their tv Treasures feature. 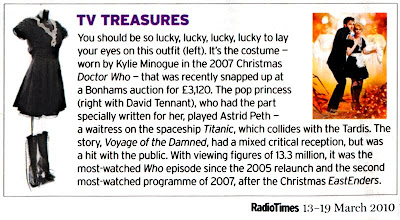 It should be pointed out that the boots were found to be labeled “Stunt Double”, so there was an ounce of doubt that Kylie had actually worn this costume.

Didn’t deter the bidders though!


You can read the other tv Treasures items here:
The Clangers
Catch-up
including a Dalek, a Vervoid,
Jon Pertwee jacket & 1970s cover

Posted by Steven Ricks Tailoring at 15:11