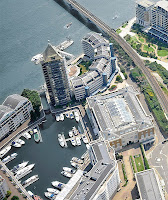 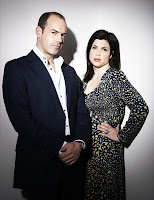 Anyway, the building we were in was serviced offices, with a mix of tenants: there was an interior design company who did all the expensive houses around Chelsea; a hedge-fund company (if only we had known before the credit-crunch, we could have knee-capped them!); Phil Spencer of Channel 4’s Location, Location, Location fame (see left with Kirsty Allsop) had his office there (I recall the staff all leaving when his company went bust . . . ); and across the floor from us was Guess. 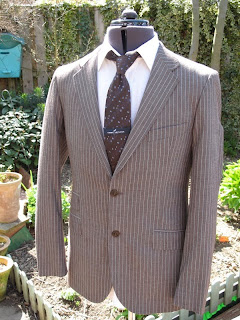 No, I’m not asking you to guess – we had Guess – the clothing store. It was their UK head office and was where their buyers chose and controlled the new stock for the upcoming season.

At the end of the year they would have a sample sale, and they invited staff from all the other companies in the building to come along and see what was on offer.

It was all stuff that failed to make the cut and didn’t get to be seen on the high street. At least that was my understanding. 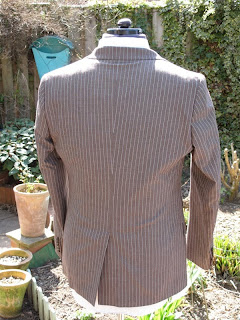 Divided into womens and menswear, it was the jacket that I spied first. It was on its own and I just have to grab it. I later spotted the matching trousers on a separate rack, so I was over the moon to have the whole ensemble!

The only thing was, being a pre-production sample, there was little labeling and no indication of what size it is.
When I got it home I found out – it was at best a medium size – so too small for me.

Never mind – I had bought it more out of curiosity than to wear.

So, the suit itself is a two-button, single breasted slim fitting jacket with a single slit at the back.

It has three outer pockets and two inside ones. They have differing hand-stitched detailing around them (see below). 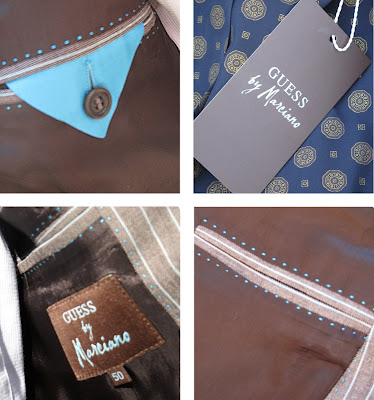 So, how does the fabric compare to the screen-used GAP trouser material?

Above is the screen-used GAP trouser, and below is the Guess suit material.

Since the suit does not fit me properly, and given it has languished in the back of my wardrobe for over two years, I am happy to sell it to anyone interested.
If you’d like to make me an offer, drop me an email to
Email me at tennantcoat@me.com.

Posted by Steven Ricks Tailoring at 23:15