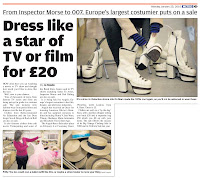 As the Doctor Who costume sale looms at Bonhams the end of the month, another sale took place at Angels this past weekend.

I read about it in a publicity article that appeared in The Metro in late January (see right - click to enlarge to read the full text).

It’s by no means in the same league, but with over 3,000 people attending the last similar sale, and over 25,000 items up for grabs – it’s not to be ignored. 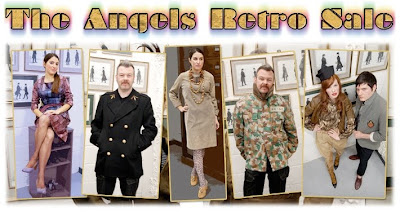 Every now and then Angels have a clear out of old and redundant costumes which, to be honest, have seen better days.
Last year they put attributable items (by which I mean costumes for known productions, or with leading actor’s names written on the labels) into two auctions at Bonhams. These included some Who stuff, and you can read about those item in the 16th June and 16th December sales.
They were then left with a lot of items with no known history and have had a series of sales to clear them.
But instead of being a highest-bidder auction, it was a as-much-you-can-stuff-in-a-bag for £50 scenario.
The first such sale was held on 6th December 2008, and was called The Big Vintage Sale. Over 100,000 items dating back from the 1940s to modern day were on offer and over 3,000 people descending on their Wembley warehouse to buy a piece of fashion history.
This was followed on 28th November 2009 with The Angels Uniform Sale, with some of Angels’ vast stock of both military and civil uniform items. These included a huge quantity of uniform clothing, helmets and headgear and leather and webbing equipment. In the main these were real pieces dating from the first half of the twentieth century onwards although some of the earlier period pieces were reproduction, created for specific films. With very few exceptions, everything here had been used on a film or TV production at some time, but in the most unattributable.
So, this third sale, known as the Angels Retro Sale, once again gave fashion enthusiasts the chance to update their wardrobes with vintage fashions from five decades and original uniform clothing at bargain basement prices.
Over 25,000 items of clothing and accessories were on sale from the 1950s all the way through to the 1990s, including suits, skirts and blazers from the 1980s; 1970s coats, trousers and dresses; 1960s coats and skirts; and vintage handbags. There was also one room devoted to a selection of high-quality military and civilian uniform items including military overcoats, jackets and capes.
All of this stuff is from unknown productions, with few items attributable to any named stars or actors, so their sale value is negligable. Some of it, I am told, was purchased by Angels for stock, but never even used.
On the day I was up with the lark and off to Angels warehouse in North Wembley. The sale was due to start at 8.30am and luckily I am only 25 minutes by car from the venue, so we set out at just before 7am, and were in the area before 7.30. To start with we couldn’t find it, but then I spotted the queue - that would be it then.....

My other half wasn’t that interested in the sale, and even less about queuing in the cold for over an hour, so he left me to it.

I struck up a conversation with a girl behind me, who told me how long the queue was, as she had ventured to the front before joining the back. She said there were a few hearty soles down the front with sleeping bags, so we guessed they’d been there a while. Fools.
I chatted for a while to a few people around me in the queue and found a hint of a common thread amongst us. The girl I had been talking to teaches drama to school children, and does bits of acting on the side. Asking her what she had done, she said ‘the usual’ - which in the UK means The Bill and Eastenders - which, sure enough, she’d done!
The girl in front of me was in tv graphic design, and working on the latest series of Ashes To Ashes. Her job is to produce any signage, newspaper or artwork based props needed. Interesting work I think.
And in front of her were a couple who run a fancy dress hire business out of their home.

By now the queue had finally started moving forward and anticipation was high.
They were letting people through in batches, so the queue was stop-start until we were at the door.
There was a £5 entrance fee, then up some stairs to the first floor, where several large rooms had been laid out with rows of big boxes, brimming with twisted jackets, trousers, shirts etc.
Stock was not individually priced, rather everyone was free to fill special plastic bags with whatever they wanted. A medium-size bag cost £20 and a supersize bag £50.
One room was labeled menswear, another womenswear, so I parted company with my queue friends and started the rommaging to find anything remotely decent.
I quickly discovered a majority of stuff was nothing more than second hand clothing from Marks & Spencer or other such high street stores, and their crumpled and sometimes torn nature made them less attractive than finding them in a charity shop.

My attention was therefore directed to finding something more useful to me and of an older vintage.
Looking in the 1950s section I started to find various tweed trousers, not dissimilar to those worn by William Hartnall or Patrick Troughton. Some had interesting design details I might be interested in reproducing at some stage, so I rolled them up in my bag.

In the far corner was a  military uniforms room, with racks and racks of hung greatcoats and soldier’s uniforms. The greatcoats caught my eye, and looking down the line I found one large enough for me and with its buttons still intacted, as most had their buttons removed (see right).

After getting home and doing some research, I think the coat is a North Korean Military coat. It could possibly have featured in the Bond film, Die Another Day. 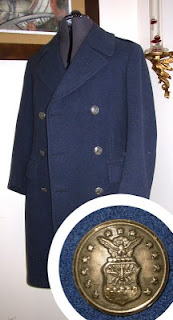 This pretty much filled my second bag, and I just had space to fit a further 3/4 length military jacket (see left) before I thought enough was enough. Two bags was £100, and I wanted to keep to my budget.
Before I left I wandered around a bit more, just to see if there was anything I missed. During my wanderings I bumped into the girl form the queue and she too was hitting a wall with the sheer volume of stuff on offer.
She did tell me, however, that a couple of women had come to blows, literally, over some items and punches had been exchanged! This, on so many levels, was worse than the Harrods sale . . . . 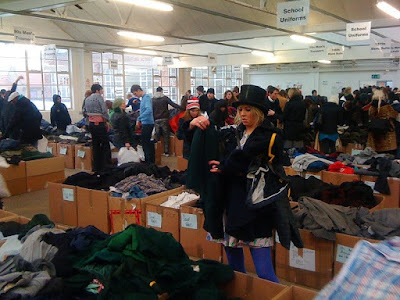 Posted by Steven Ricks Tailoring at 17:26