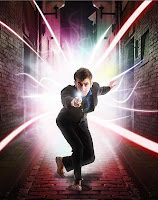 Now, those who have followed my Suit and Coat blogs, will recognize the face of Guy, a young man who bears more than a passing resemblance to the great man himself, David Tennant.
I first met him on Hound Tor to see first hand his Baron Boutique Suit.
You can read all about that under Ten to the power of Two and Sontaran G3 Military Assessment Survey.
He also popped up in my occasional feature, Me And My Tennant Suit, at the end of which was the amazing photograph seen here.
It looked a bit more polished than the norm, and he told me it came from a professional photoshoot. Here in his own words, is the full story of how this and the rest of his fantastic photoshoot came about.

It all started when David Tennant returned to Doctor Who in series two. His hair was more spikey and gelled which looked very similar to mine. My girlfriend at the time noticed the resemblance and wanted me to grow my hair a bit longer as well as the side burns! When I did this my girlfriend and her friends kept saying how I looked like the doctor.

We had a few drinks one evening and my ex girlfriend sent a picture of myself to a look alike company on the web. They replied with a positive response which I was very shocked by! After this I started wearing a black suit with trainers to fancy dress parties trying to do my best to be the doctor! It worked fairly well but it wasn’t right! 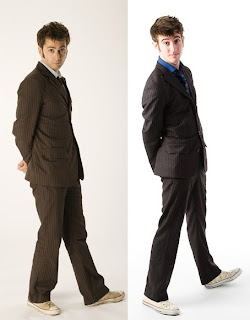 Ever since I started to get recognised as looking like The Doctor I wanted the actual suit to wear to parties so I looked more like the real deal! I searched for about two years, the only thing I could find was the honest dragon suit. I eventually bought this, which turned out to be terrible and I never wore it. I continued searching and managed to find the Magnoli version. It was a fair amount of money and to me the pinstripe seemed to be very wide apart compared to the real suit, so I opted out of this version. I then managed to track down the Baron Boutique version from searching through forums and Google searches. It took me a while to pluck up the courage to order the suit as I didn’t want to waste anymore money, as I did with the Honest Dragon suit. Eventually I managed to measure my fittings and saved enough money to order one, it is the best suit I have ever bought. The pinstripes line up, the material is very good quality and the fit is brilliant, just like the real deal. The only downfall is that the brown is darker than the actual suit but unless you’re a fanatic you won’t really notice. 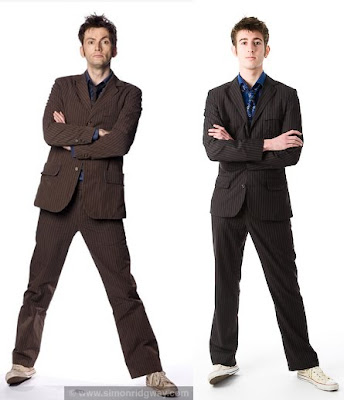 Now I was wearing it to fancy dress parties and really getting noticed. I went out in Cardiff dressed as the doctor for Halloween, ended up with a couple of people asking for autographs, club doormen saying I looked like David Tennant and a lot of stares, great fun! It has been an amazing confidence boost for me and in a strange way a truly life changing experience, letting me meet people I would have probably never had the courage to talk to previously. 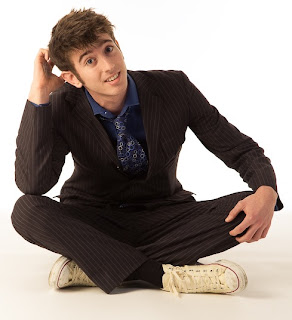 After the experience in Cardiff I thought it was about time to pull my finger out and finish what my ex girlfriend had started. I scanned around a few photography companies looking for different deals and offers that they could do. I managed to find a very good professional company called exe sight photography, based very close to where I live. After contacting them they were very interested in carrying out a shoot with me and gave me a very good deal for creating a couple of who themed backgrounds, which have turned out great.

I have now sent a few of these photos off to the companies which my ex girlfriend originally contacted and am waiting on reply. With this I have also had some very enthusiastic friends who have created a group dedicated to me on facebook which now people in Florida have joined! If I manage to get any lookalike work I am hoping that it may push me into the acting environment which is something I have always wanted to do but not had the confidence until now. So Doctor Who, David Tennant has played a big part in bringing me out of my shell you could say! On Wednesday I attended the national TV awards. I thought it was a good opportunity for a slight change! I managed to pull off the black tux suit with black converse that The Doctor wore in a couple of the episodes. I was noticed a few times by some kids and a few older people saying I looked like David Tennant. The next thing on the list to be ticked off is the blue suit! I have searched for this but currently can’t find one anywhere. 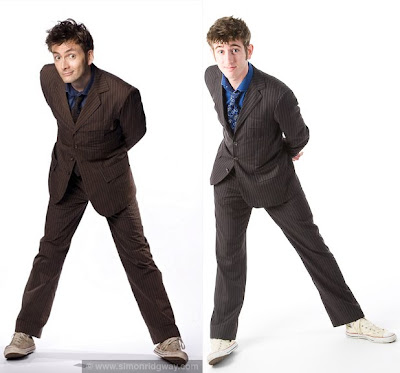 You can see the full photoshoot images here:

Posted by Steven Ricks Tailoring at 21:11