I have now designed the bulk of my Tennant Suit Pattern, and have cut the main parts in the Burgundy Pinstripe Fabric I have created. Time now to start making it up.

As I do with the Tennant Coats I have made, I have found it much easier to work the panels of the garment flat, setting the pockets separately as I go, rather than trying to do them in a bulky, already made-up coat.
I start with the breast pocket, repeating what I did in the Calico Test. 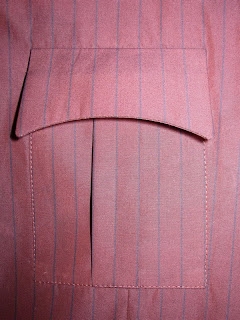 I sew the front panel of the pocket to create the pleat which is exactly two pinstripes wide (see above, left), and press it flat. I then attach the lining along the top edge and fold it in half, making the pocket front (see above, centre). The edges are then press over and stay-stitched ready to be sewn onto the jacket (see above, right).
The flap above the pocket is sewn from two halves, and simply attached inverted in place and pressed firmly into its final position (see right).
I then make the flaps for the faux flap pockets. To make sure they don't curl upwards after they are in place, I use a simple little trick: I put in a pin pointing towards the tips of the corners (see below, left). This pushes the top over the underside by the slightest amount and when it is sewn (leaving the pins in place) and turned rightside, this subtle distortion remains and the corners curl slightly, but in the direction I want them to (see below, right).

The flap is then pressed in half to its final size (see above, right) ready to set. I do this now, because if it is pressed after it is sewn in place, it can leave a nasty footprint on the body of the jacket under the flap. 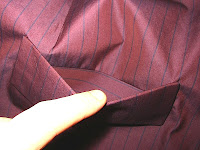 I then add a pocket bag below and top-stitch the sides of the pocket under the flap.
Below you can see the flap down (left) and the flap up (right). Both these images are at the same level, and you can see the level of the welt and pocket opening under the flap at the bottom of the rectangle of reinforce stitching. The pocket flap then rises a good inch above this level, concealing where the pocket is set. 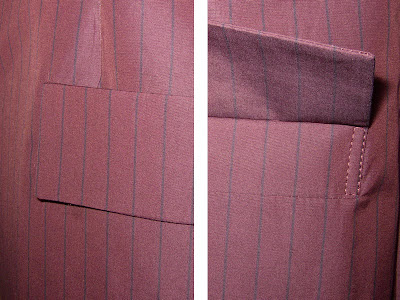 In the meantime I have been working on revising the pattern for the back, to include the belt and back vent.
I have added material for the vent and in my college course, produced a sample to text the technique for how to best make it. This went very well, so I have cut the back in burgundy fabric and lining.
The back is sewn from the nape of the neck to the top of the vent, which starts immediately under the bottom of the belt.
I then pin the belt across the back (see below, left). Then, starting at the bottom centre of the belt and and working in a clockwise direction, I sew the belt in place, avoiding sewing the vent fabric in with it (see below, right).

I can then attach the lining around the vent, which goes very well (see below). 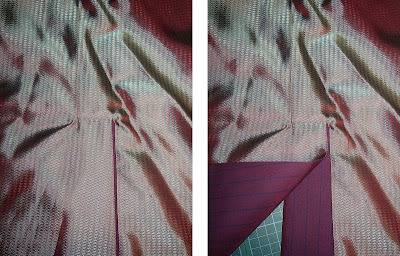 This, amazingly, is the bulk of the work to get the body ready for assembly (see below). 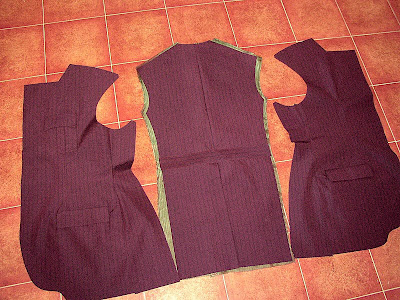 I will leave putting it together for another day, and then move onto making and setting the sleeves.

Check back soon to see the next stage.

Posted by Steven Ricks Tailoring at 19:18