Me And My Tennant Suit - Evert Joosse

It’s been a while since I have run a Me And My Tennant Suit, but we’re back with a Ten from the Netherlands. 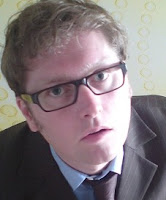 Evert got his Magnoli Tennant Suit in January 2011. “I had wanted one for a lot longer than that, but that was when everything finally came together”, he told me. He has also had very good experiences with Magnoli Clothiers in the past, so decided to go with them. 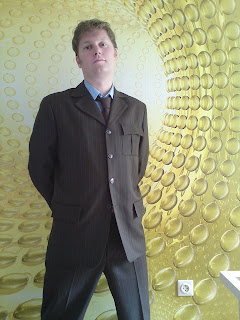 Tennant isn’t his first Doctor. “From about the age of ten I have been a massive Doctor Who fan.” he explained. “At that time I used to watch Peter Davison, who is still very much my doctor. And I have always been in to wearing suits, as I find them both stylish and comfortable.”

From that early age he always wanted to dress like the Doctor, which in his case meant cricket sweaters and a penchant for beige clothing! “Which is fine when you are a child,” he says, “but when you grow up people expect you to dress differently. Therefore it was a happy day for me when the Tenth Doctor came around, looking great and stylish, but in a way that you can get away with.” 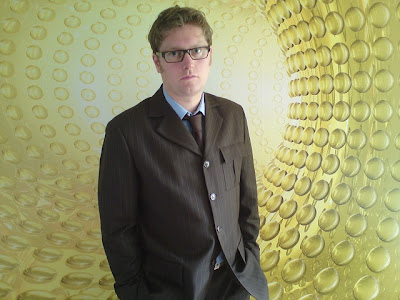 This gave him an excuse to get a suit like David Tennant’s Doctor to wear in everyday life. “Doctor Who isn’t as big in the Netherlands as in some other countries, so I can get away with it over here!” 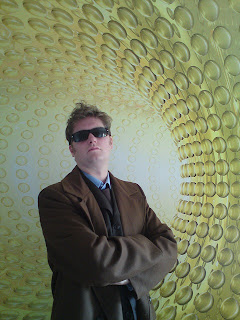 “As I was looking for every day wear, I asked Steven Ricks for advice on which material would be the best option.”
I did my best to advise him, telling him that if he intended investing in a suit to wear a lot, he would be best to go for wool, as the more screen-accurate cotton will not wear that well in the long term.

“The suit fits quite well”, he told me of his Magnoli suit, “Although it is a roomier, more comfortable fit than the one David Tennant wears. But that’s just fine with me.”
The generous fit seems to be something consistent with the fit of these suits, as I have seen this in a number of Magnoli suits, mine included.

But how often does he get the chance to step out in his suit? “I tend to wear it most occasions that I can get away with wearing a suit, so weather permitting, so quite a lot.”
“As I am a primary school teacher, I don’t wear it to work though. The children in my class have however did get me to dress up as Peter Davison’s Doctor for carnival once, but that was mostly for fun!” 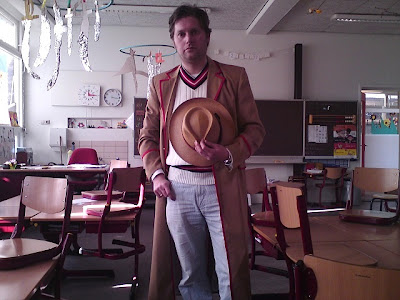 Evert then revealed a hidden side to himself: “I have been a historical re-enactor for years wearing all sorts of historical clothing, but it was only after I had ordered my suit that I came in to contact with the Cosplay phenomenon. Before that I always just though of it as dressing up.” 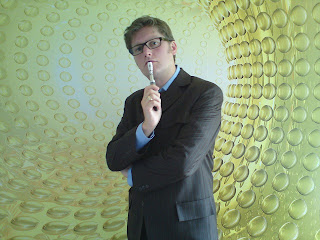 Recently Evert was invited by the Dutch Doctor Who Fan Club, the DTTA, and he decided to wear the suit for that occasion. They loved it.

I asked him what he liked most about his suit, and what he thought could be improved. “Well first of all, I have the feeling that the suit looks good. And when you feel that you look good, you feel good.”
There’s the knowledge that he knows it is a Doctor Who suit, but most people in the street don’t. “I love the suit. The only thing that I could possibly improve is the price tag. If these would be cheaper I would have bought several by now, but I certainly intend to have a blue version done in the near future.”

But what does Evert think of the new kid on the block - Matt Smith? “Don’t get me wrong, I believe Matt Smith is doing an excellent job, but his style really isn’t my style. Personally I always used to dress a bit like Jarvis Cocker anyway…”

With thanks to Evert for sharing his thoughts and Tennant suits with us.
If you have a Tennant suit and would like to share it too, please get in touch by emailing me at tennantcoat@me.com.

Posted by Steven Ricks Tailoring at 20:50