The Armani Six:
The Unexpected Journey to collect them all

I am often contacted by readers who either want advise on tracking down more screen accurate costumes, or want to show off their latest purchases that are worth sharing with my wider readership. 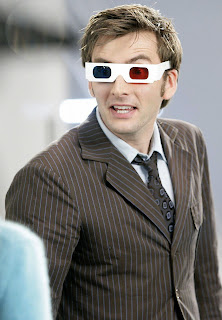 Over the past couple of months I have been chatting to a client of mine who has been an avid (no obsessive!) seeker of a screen accurate Giorgio Armani tie.

His quest had recently come to fruition - something to give all with a similar goal good reason to keep pursuing their dream.

It cam out in conversation that he now had amassed SIX different versions of the tie, so I invited him to put his collection in writing and below is a breakdown of his impressive collection. 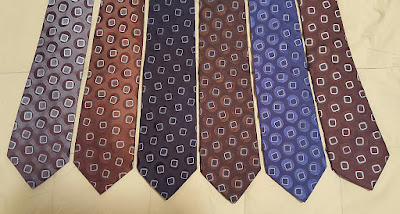 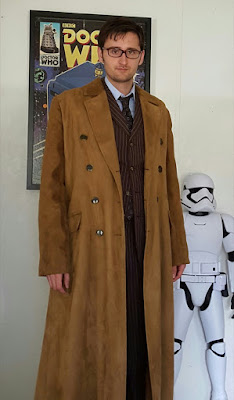 A few months ago, I became a very happy collector and cosplayer: My dream of owning an original brown Armani tie, came true. My journey didn’t start there, though. Along the journey that would take years to complete, several versions of this beautiful tie would come my way...

First came the reproductions, then the originals trickled in, until I struck gold. Originals are always fun, so I'll start there and work my way back: 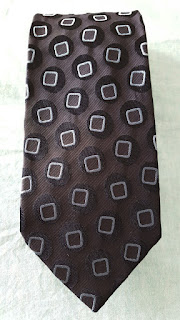 First in the group of originals is the black colourway variant of the Armani tie. To admit, when I first laid eyes on the auction and purchased it late last year, I thought I had found the brown version.

When the package arrived, I was disappointed to see it was the black variant.
The mistake is due to the colour the tie can take on when photographed. The seller had only taken a few close pictures. In some shots it takes on an almost brown quality! Still beautiful, and would look sharp with many dress styles. 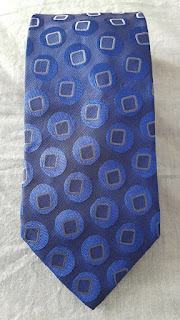 My next original would come in the form of the blue variant, which also hit eBay late last year. After some debate on whether to bid or not, I figured what the heck. I won, and I opened it on Christmas.

Let me just say, this tie is BLUE! It’s almost obnoxious. That's part of the fun of it, though. I haven’t seen what could be worn with it yet, although I suspect it might look okay with Tennant's blue suit. Still have to see... 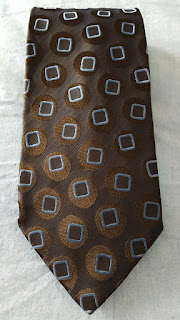 My third original, which I have searched day and night for, over the last two years - my personal Holy Grail of Doctor Who: The brown Armani tie! After watching a new episode of The Walking Dead, it was time to do my usual eBay searches. This time, I would hit gold.

After a week of nail biting, and going back-and-forth with the seller to find out what she planned to do with the tie (yes, many were offering sums of money), the Sunday night finally came. With seconds to spare, I placed my bid and felt my heart jump for joy when I saw the note saying I was the winner.. My wallet hated me. Apparently I wasn't the only one willing to give my all.

This auction was featured on my blog in March 2016. A reader had alerted me to it after he had missed out (one of those willing to give their all). I was later contacted by John Tennant Smith who said he was the buyer of the tie! The result of our discussions is the article you are reading.

Even after the auction ended, I was still nervous until I finally got the notification of my tie shipping. From the time the auction had ended, until it was shipped, the seller was still getting offers on the tie had I chosen to back out. Not a chance, though! When it arrived, it was the feeling of Christmas all over again. This egg tie is so beautiful, that I couldn't stop smiling for the rest of the day. While the repros are nice, they certainly aren't able to catch the spirit of the real deal. Seeing that Steve had posted about the auction, and being a buyer of his for one of his beautiful coats, I had to throw everything together for a quick picture and message him about who the winner was. Excuse the Kilgrave scruff ;)

Onto the reproductions: over the years, Indy from Magnoli Clothiers has produced this tie in three different versions (with a fourth red version on the way). 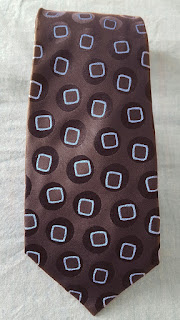 My first version of the Armani is the first one he produced. I bought this tie a couple years ago when he had made the switch to his current Armani.

I was new at cosplay and collecting, saw this on eBay for about half the price of his new version, and figured it was good enough. As I wore it with both my Baron brown suit and Magnoli brown suit, I became unhappy with how bright the tie was compared to the original.. 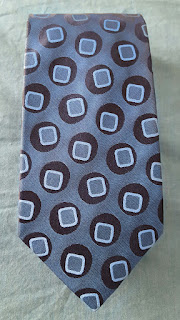 Cue the second Magnoli tie produced: his alternative colourway. At the mistake of his factory, the colours messed up, taking on the look of the Armani when shot at an angle, appearing dusty blue.

I figured it’d look cool to wear, so I picked it up. It’s a nice tie for the Doomsday look. 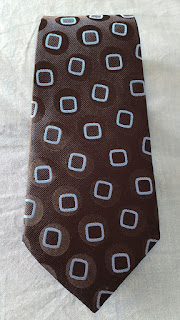 Things come in threes: Magnoli Clothier’s third, current iteration of the Armani tie. I love the Armani, and having become unhappy wearing my two reproductions that I own...  I bit the bullet, and bought his new version some months after he released it.

Upon opening it, I loved it! It really is a great alternative to the original.

While buying the repro ties, I never gave up looking for an original, knowing that was my end goal. It took a great while, but I did it. Thoughts of what to do with the others have crossed my mind. Maybe one day the collection will split, but for now I like the family of Armani's, as it tells my story. 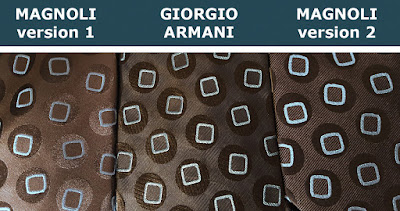 The first tie Magnoli produced had captured the embroidery of the blue boxes almost perfectly, that his future iterations went away from. Magnoli's second tie (blue colourway) used a more accurate silk base that his 1st and 3rd lack. Magnoli's current iteration lined up the egg pattern perfectly. If all three of those qualities mixed, and a base colour tweak, I bet the results would be stunning. 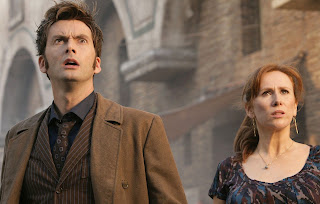 To close out, I'm proud of this accomplishment. The Armani is over 10 years old! Many may have been produced, but with how many have likely ended up in attics to rot, dumps, shipped to far away lands, or are just sitting in some hole in the wall thrift shoppe... very few have ever surfaced on eBay; who knows when the next one will pop up. However, if you want something, and can stay determined and wait it out, then there is always the chance to accomplish your personal goal. 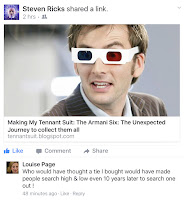 Recognition has come for John’s quest, in the form of a comment posted by none other than Louise Page herself.

Who would have thought a tie I bought would have made people search high & low even 10 years later to search one out!
Posted by Steven Ricks Tailoring at 12:41