Starting work on the suit

I have revised this post following some comments from Seth, who refers to the back as ‘belted’ and the breast pocket as ‘box’; and Primrodo who has helped with some pocket detail.

There are several key design points I wanted to achieve with my suit.

LAPELS & COLLAR
The lapels and collar are set quite high. The way the pinstripes sit on them give some clues as to their shape, but conversely, also limit how it can be cut without them hitting right, so I will have to be careful.
POCKETS
The breast box pocket is a fairly easy design to follow; the outer pockets have a peculiar quirk to them that will need some further research to get right. The pocket flap is attached to the lower welt, not he upper, hence access to the pocket is ABOVE the flap, not under it as with conventional suit pockets. But then, this is no conventional suit!
BACK
The belted back needs to be at the right position, just above the back vent. This will make sewing it on a little challenging, but I'm sure I will work it out.
TROUSERS
I will make these to a fairly standard pattern I have bought - only thing is, I have never made trousers before, so that will be fun!
To arrive at a decent pattern, I have, like I did with my coat, sacraficed my old Honest Dragon suit in the name of tailoring, and have taken it apart to see how it was made (with a pinch of salt) and use it as a spring board for my pattern.
I had made a start on the calico test suit last weekend and pretty much blocked out the body of the jacket and after some trial and error, sorted out the lapels and collar. I'll take some pictures and post them soon. There were some problems with the existing cut, which when I corrected for it, threw up other problems.
This weekend I wanted to crack the breast pocket. 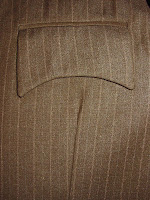 My Honest Dragon suit had a very basic breast pocket. It was just a welted pocket with a flap to roughly the right shape. It totally lacked the externalized boxed pocket that it should have. I don't know if they have fixed this for more recent suits, but I am totally ignoring this for my pattern - it brings nothing to the table! 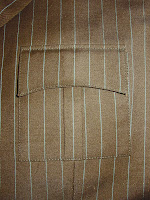 Later, I bought the Magnoli suit, which is much better observed and has all the right details. The execution is good and assembly is much better. It has the box pocket and by studying it, I picked up some tips of how to make it real easily. The size of the pocket is not quite right; the gusset could be wider; and the pocket is a little too square, where it should be more rectangular. 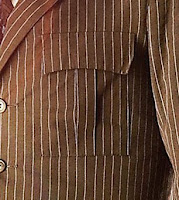 I also looked at various photographs of the real suit and picked up on a couple of points. The suit is pinstriped, so it is very important to make sure the 'pattern' falls right when it is cut.
If you look at this detail picture, you can see that the gusset on the pocket spans three pinstripes, and the pocket overall is 13 stripes wide. I compared this to the Jo-Ann fabric and worked out that the Jo-Ann stripes are set further apart. So there will have to be a level of compromise with cutting the pattern to the stripes, but I felt it important that the gusset covered the same number of stripes; I would just have fewer to the left and right. 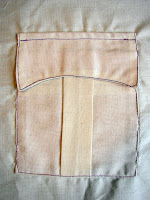 I took my measurements from the Jo-Ann material, and cut a pattern to match. To check the technique of making it I made a rough version in calico, using a contrasting thread, which shows up quite badly here, but the pocket proved the method to me. I will be much neater on the final job!
You can't see from this picture, but it is fully lined as it would be in the finished suit.
I then quickly moved onto the moleskin test suit and set a fully finished version. 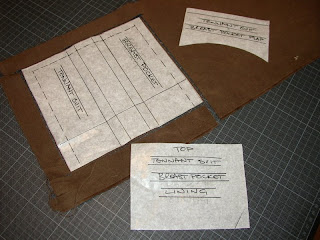 The pocket is made from three pattern pieces, cutting four pieces of fabric. You can see them all here in this picture: the breast pocket itself, with the folds marked; the simple square of pocket lining; and the scalloped pocket flap, which I cut in both suit fabric and lining.
UPDATE: Primrodo has informed me the flap should be lined with suit material, not lining. I will be including this point in my final suit.
It is then a simple job of sewing the two internal folds of the pocket together (of the four parallel lines on the pattern, these are the two furthest apart), then ironing it out flat to make the gusset, which is therefore only for decoration and has no practical use. 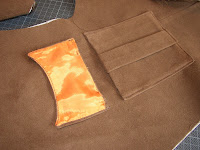 The lining is then sewn to the box pocket front to secure it for ease of assembly, before folding the edges over to the dotted line (see picture of pattern above) and pressing firmly. This is then simply pinned to the body of the suit (after carefully working out its position) and then top sewn in place. I did a couple of extra turns of stitching at the top of the pocket to make sure it was strongly attached. This went on easier than I thought. 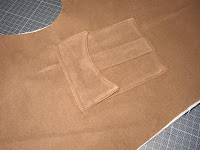 Sewing the pocket flap was also equally painless, and I realized there was a simple trick to making a nice neat seam. Firstly I attached it flapped up, with a single line of stitching close to the edge of the flap. I then folded it down into final position, pressed, and did a single line of stitching to complete the job. This then encloses the raw edge of the flap, making it look very neat. It also creates a nice line of beading along the top of the visible flap.
Here is the finished result, which has come out pretty well I think. Looking back at these pictures, I think my pocket is still a little to square, so I may well adjust the pattern before doing the final suit. I also think I set the flap too low; setting it higher would make the pocket look taller. 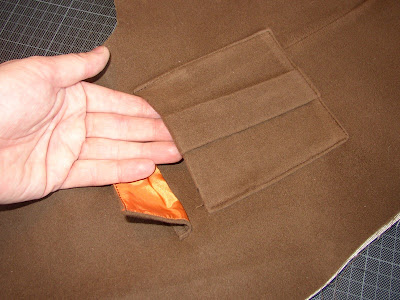 The moleskin fabric bulks a bit, but this will be all sorted out when I use the Jo-Ann fabric as it is much thinner cotton material.
Before going onto the outer pockets I need to study them further, so at this point I called it a day on the suit and moved on to do an extended afternoon of work on the calico test for my new Tennant coat.
You can read about that here:
Tennant Coat - New Beginnings
I'll be back on the suit next weekend to do the outer pocket with luck, but should post some pics of the suit lapel work before then - so check back to see progress real soon . . . .
Posted by Steven Ricks Tailoring at 10:09